A new Prime Minister is expected to be appointed tomorrow, the day before MPs break up for the summer recess. With just 14 weeks remaining before the current Article 50 deadline, the Commons is then not due to meet for almost six weeks. This creates some very obvious scrutiny gaps. Meg Russell and Daniel Gover suggest that pressures for a Commons ‘recall’ during the summer recess seem likely, but that this will revive difficult questions about who can, and should be able to, recall MPs.

On Thursday, MPs are due to leave Westminster for the summer recess. Yet, barring mishaps, a new Prime Minister is expected to be installed in Downing Street only the preceding day, making immediate parliamentary scrutiny of the new government’s key decisions all but impossible. An added pressure, of course, comes from the Brexit context. The current Article 50 deadline for the UK to depart the EU is 31 October, but parliament is due to remain closed for around half that time – for almost six weeks initially, until 3 September, followed by another break for the party conferences. During this period, calls for parliamentary scrutiny of the new government – most obviously over Brexit – seem very likely to grow.

In this post we examine the pressures that may build for a recall of parliament during the summer, and what mechanisms exist for MPs if they do. Crucially, a formal Commons recall can only be initiated by the government – which may push parliamentarians towards innovative solutions. In the longer term, pressures for reform of the recall process may well be revived.

Why there may be pressures for recall

Demands for the Commons to be recalled from a recess are not unusual, as discussed below. However, they seem especially probable this year. MPs are set to break up just one day after the new Prime Minister takes office, while the tensions over Brexit and how he intends to handle this (particularly if the winner is Boris Johnson) are running high.

An initial challenge, raised in another recent post on this blog, is whether it will even be possible to know that the new Prime Minister and his government enjoy the confidence of parliament. The first action of a new premier is to appoint a cabinet, followed by junior ministers. Within the 24 hours available to the House of Commons, this process may not be complete. As the Commons’ confidence depends not only on the personality of the Prime Minister, but the personalities and balance of the whole government, this could well be brought into doubt. Additionally, there will be very little time under current plans for parliament to quiz the Prime Minister on his Brexit strategy. A statement on Wednesday afternoon or Thursday is possible, but not assured – and if MPs are dissatisfied there will be very little time to respond. The immediate start to the recess hence already looks problematic, and MPs may depart amidst claims that the new Prime Minister is dodging scrutiny. END_OF_DOCUMENT_TOKEN_TO_BE_REPLACED

Each year, the Hansard Society conducts an Audit of Political Engagement, which seeks to measure how the public views and engages with the political process. The latest Audit demonstrates that public dissatisfaction with our political systems and actors is worryingly high and increasingly intense. However, as Lawrence McKay explains, disaffection has not yet translated into disengagement.

The Hansard Society’s Audit of Political Engagement, now in its sixteenth year, is an annual study, giving a benchmark to measure public opinion about politics and the political system, as well as how engaged people are in the process. The Society describes it as an ‘annual health check’ – and this time round, the patient is in a bad way. Commentators love to declare a crisis, and the Society has often cautioned against such framing. More often than not, there is more continuity than change. Yet this year’s findings can hardly be described any other way.

Opinions of the system of governing are at their lowest point in the 15-year Audit series – worse now than in the aftermath of the MPs’ expenses scandal. People are pessimistic about the country’s problems, and large segments of the public seem willing to entertain radical changes which would alter or even undermine our democracy. While they are no less engaged in the democratic process, many people increasingly want to keep their distance and not to take part in decision-making.

The striking thing about this year’s Audit is that not only are more people unhappy, but the intensity of their discontent is unprecedented.  Our ‘core indicators’ are the best evidence that something is amiss – in particular, our question on ‘the present system of governing Britain’, and how much it could be improved. We find that discontent is at its historical peak, with more than seven-in-ten feeling it needs either ‘quite a lot’ or ‘a great deal’ of improvement. Furthermore, people are moving into the most negative category. The proportion who stated that it needs ‘a great deal’ of improvement, at 37%, has roughly doubled since the first Audit in 2004. This increased discontent is broad-based, occurring across all social classes, age groups and levels of education. If there is a common thread to where it occurs, it is among non-voters where discontent has risen most. It may be that people who are already disengaged are finding more reasons to hate politics, but many voters are, too.

Yet, while the wider system is held in contempt, it is mostly political actors that bear the brunt of this. We asked our respondents to give their level of confidence in different groups ‘to act in the best interests of the public’. Groups like civil servants and judges generally garnered positive ratings, but the government, MPs, Lords and political parties were judged more negatively, with around two-in-three expressing low or no confidence. The exception – in line with results of previous studies – was local councils and the Scottish government who were seen somewhat more positively than UK-wide actors. END_OF_DOCUMENT_TOKEN_TO_BE_REPLACED

Robert Hazell discusses the challenges around developing legislation that will permit MPs to be recalled.

It was not a complete surprise to see the right of recall in the Queen’s Speech. The coalition government had kept open the option of legislating in a series of exchanges with the Political and Constitutional Reform Committee over the last two years.  The proposals stem originally from the MPs’ expenses scandal in 2009, which led all three major parties to include almost identical proposals for a right of recall in their election manifestos in 2010.  The precise commitment of the coalition parties in the May 2010 Programme for Government was framed as follows: 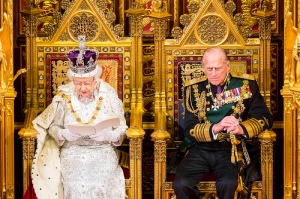 ‘We will bring forward early legislation to introduce a power of recall, allowing voters to force a by-election where an MP was found to have engaged in serious wrong doing and having had a petition for a by-election signed by 10 per cent of his or her constituents’.

True to its word, in December 2011 the government published a draft bill and White Paper.  But in 2012 the Commons Political and Constitutional Reform Committee (PCRC) produced a very critical report, which led the government to pause.  The committee feared that the restricted form of recall proposed could reduce public confidence in politics by creating expectations that were not fulfilled.  The government’s long pause suggests that it may have shared the committee’s doubts.  But the rise of UKIP in the 2014 elections and continuing resentment against ‘establishment’ politicians tipped the balance: the government felt obliged to be seen to be doing something.

END_OF_DOCUMENT_TOKEN_TO_BE_REPLACED

The UK Parliament was recalled on 10 April to mark the death of the former Prime Minister, Margaret Thatcher. This post does not discuss whether recall was an appropriate response – personally, I do think it was – but considers how Parliament, especially the House of Commons, was recalled, as it is a good example of the wider, and fundamentally important, issue of the autonomy of Parliament, and its relationship with the Executive.

Parliament’s website announced the recall of both Houses. In respect of the Commons, it stated that “Standing Order 13 gives the Speaker the authority to recall the House of Commons when it stands adjourned, if he is satisfied it is within the public interest.” That sounds fair enough, in keeping with this core democratic body’s standing as the main representative forum of the people. But wait, what it didn’t say was that such a recall by the Speaker can only be done if triggered by the initiative of the Government. What the Standing Order actually says is:

So, at least as regards initiating recall of the Commons, the Daily Telegraph headline “Margaret Thatcher: David Cameron recalls Parliament for ‘remarkable’ former British leader” was probably a more accurate statement. A report in the Guardian suggested that the recall “was the idea of the prime minister and involved him in a lengthy wrangle with the Speaker’s Office. John Bercow felt there was no need to recall parliament, and was taken aback by the request. His office thought the tributes could be paid next Monday in line with precedent for previous deaths of party leaders. At one point, Cameron had to enlist the support of Miliband to overcome the opposition, and Labour sources said they felt faced with a fait accompli and did not want to risk being seen as failing to show Thatcher due respect.”

A useful Parliamentary briefing paper issued on 9 April, discusses the procedural and practical aspects of the Commons recall process; looks at how it is handled (generally differently) in the Lords and in the devolved parliament/assemblies, and proposals for its reform, within and outwith Parliament, especially to make it a procedure in the hands of the House and its Speaker rather than subject to the instigation of Ministers.

In particular, it records such a proposal by the previous Labour Government, in its 2007 green paper, The governance of Britain, and the announcement of an inquiry into this and related issues by the then Modernisation Committee. Despite much trumpeting at the time that the Modernisation Committee was an effective way to get Parliamentary reform – especially because it was chaired by a Government minister, the Leader of the House (!!!) – the Committee never completed its inquiry or took oral evidence, though some of its written evidence was published.

It should also be noted that the 2009-2010 ‘Wright Committee’ on the reform of the Commons – whose work is currently the subject of an inquiry by the Political and Constitutional Reform Committee – did not address various  “contentious issues” on the House’s sitting patterns, and had “no collective view” on recall, but it did make a more general point very strongly (para 101): ”But we do recommend that the House should at least decide for itself when it sits and does not sit.” [bold in original].

What a refreshingly democratic notion! How about doing something about it, dear representatives of the people?