Boris Johnson is demanding that the Withdrawal Agreement is scrapped and renegotiated, and is insisting that he won’t meet EU leaders until they agree to this. The major source of contention is the backstop, which guarantees an open border on the island of Ireland post-Brexit, but ties the UK to the EU’s Customs Union. In a new Brexit Insights paper, Nicholas Wright assesses the politics of the backstop and ‘no deal’, and what all this means for Northern Ireland.

During his leadership campaign, Prime Minister Boris Johnson engaged in an increasingly shrill rhetorical arms race with his rival, Jeremy Hunt, over who will be toughest with the EU in delivering Brexit. In particular, his ire was focused on the hated ‘Irish backstop’ which has come to symbolise all that Brexiters loathe about the Withdrawal Agreement. Indeed, Mr Johnson has promised to remove this element of the deal, declaring that if the EU will not renegotiate, then the UK will leave on 31 October, ‘deal or no deal’, suggesting that the costs of exiting in such circumstances will be ‘vanishingly inexpensive if you prepare’. Such claims fly in the face of reality and nowhere can this be seen more clearly than in Northern Ireland. Indeed, it is here that the consequences of Brexit and the trade-offs implicit in its delivery are most starkly revealed.

Since the beginning of the Brexit process, the UK government has been trying to reconcile the ‘Irish Trilemma’: UK departure from the EU’s single market and customs union; an open border between Northern Ireland and the Republic; and no new trade or regulatory barriers between Northern Ireland and the rest of the UK. You can have any two, but a combination of all three is impossible. This matters because the 1998 Good Friday Agreement and all that has resulted from it were predicated on the open and invisible border and shared regulatory space that come with EU membership. These have underpinned efforts in Northern Ireland to chart a new pathway, not least by reducing the prominence and difficulty of complex questions around identity. Doing so has not been easy, something demonstrated by the collapse of power-sharing and suspension of the Assembly in Stormont. The prospect of changes to border arrangements – and particularly anything necessitating the re-establishment of any border infrastructure – therefore risks further undermining a fragile equilibrium that reflects Northern Ireland’s ‘relative peace but minimum reconciliation’. END_OF_DOCUMENT_TOKEN_TO_BE_REPLACED

The conclusions reached by the Citizens’ Assembly on Brexit, composed of a politically and demographically representative group of 50 members of the public, were reported on this blog yesterday. In this post the Assembly’s Design and Facilitation Lead Sarah Allan tells the story of how the Assembly’s two weekends worked. 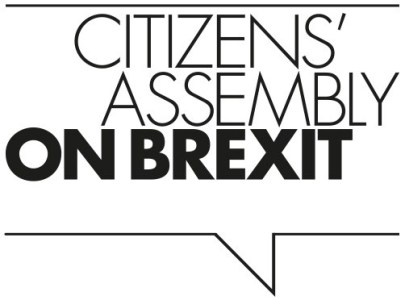 Last weekend saw the finale of the Citizens’ Assembly on Brexit (CAB) and the announcement of its results. By its end, 50 members of the public – broadly representative of the UK population in terms of age, sex, ethnicity, social class, where they lived, and how they voted in last year’s referendum – had spent around twenty-eight hours considering what the UK’s trade and immigration policy should be post-Brexit.

The Assembly demonstrated not only that citizens can have a detailed and constructive conversation about options for Brexit, but also that they can enjoy doing it. Assembly members rated the Assembly an average of 5.5 out of 6 across the two weekends, with 86% of Assembly members saying they ‘strongly agreed’ with the statement ‘Assemblies like this should be used more often to inform government decision-making.’ A further 8% ‘agreed’.

So how did the Assembly work? This post tells the story of its two weekends.

END_OF_DOCUMENT_TOKEN_TO_BE_REPLACED

The Citizens’ Assembly on Brexit reached its climax yesterday. After two weekends of intense deliberation, the members voted on a range of options for the form they want Brexit to take in relation to trade and immigration. Their conclusions will surprise some, and they deserve detailed attention from politicians and commentators. Assembly Director Alan Renwick summarises these conclusions and reflects on the weekend as a whole. He argues that, while the Brexit debate is often presented in stark binary terms, the Citizens’ Assembly suggests that the British public are capable of much subtler thinking – if only they are given the chance.

In my last post on the Citizens’ Assembly on Brexit, I reported on a hugely successful first weekend of deliberations. In advance, we had, through stratified random selection, recruited a group of Assembly members who reflected the composition of the UK electorate in terms of age, sex, ethnicity, social class, where they lived, and how they voted in last year’s referendum (25 voted Leave, 22 voted Remain, and three did not vote). We had also developed a programme and set of briefing papers that had been vetted by our advisory board, comprising supporters of both sides in the referendum, as well as experts in balanced communication. At the first weekend itself, remarkably, every Assembly member attended. They showed immense dedication, working long hours as they reflected on their own views, discussed ideas with fellow members, listened to experts, and quizzed those experts in depth. The experts presented diverse perspectives, some emphasising the benefits of single market membership or immigration, while others pointed out the costs of high immigration or argued for the advantages of cutting free from the single market and customs union. Our team of professional facilitators from Involve did a superb job of guiding proceedings and keeping the discussions on track.

This time I can report on an equally successful second – and final – weekend. Attendance was again astonishingly high: every member but one (who was ill) returned. Once again, all (and I do mean all) were tremendously focused and limitlessly good humoured. Members naturally did not always share each other’s views, but they listened and spoke respectfully and genuinely. Our facilitation and support teams were again inspirational. It was a privilege to be there.

While the first weekend focused on learning, the second was all about deliberation and decision-making. We began on Friday evening with short talks and Q&A sessions with two prominent politicians: Graham Brady MP, chair of the Conservative backbench 1922 Committee, spoke for leaving the single market and customs union; Labour MP Kate Green advocated the opposite. Thereafter, there were no more external speakers. The weekend was devoted to the Assembly members, who reflected on what they wanted post-Brexit policy-making to achieve and then on which policy options they wanted the government to pursue.

END_OF_DOCUMENT_TOKEN_TO_BE_REPLACED

Yesterday the Scottish government published a detailed policy paper, setting out options for how Scotland could remain in the EU single market following Brexit. In this post Jim Gallagher argues that the paper, which focuses on options that would involve Scotland remaining part of the UK, suggests that Nicola Sturgeon would rather avoid a second independence referendum. The First Minister may instead be edging towards a confederal solution that the majority of Scots might sign up for.

The publication of the Scottish government’s policy paper on Brexit, Scotland’s Place in Europe, may signal something of a change in tone from the SNP leadership. Reading it, one can only conclude that last thing Nicola Sturgeon wants is an independence referendum.

Certainly Sturgeon’s tone contrasts with the noises off from Alex Salmond, who has been energetically laying the groundwork for a rerun of 2014, or some of Scottish government Brexit minister Mike Russell’s earlier rhetoric. It is still possible to conclude from the paper and the logic of the SNP’s argument that, if they don’t get the concessions they hope, then they will be demanding another independence referendum. But the big message from the paper and its presentation is not bullying language about when a referendum might be called: it is that the SNP don’t think leaving the EU justifies repeating the independence poll at all. Instead they are setting out ways the UK can leave the EU without one. Can the UK stay in or near the single market, or at least can Scotland? If it can the UK leaves the EU, but the SNP won’t find themselves demanding ‘indyref2’.

Opponents of independence can respond in different ways. It’s easy enough to mock. Many, supporters and opponents alike, will say it’s fear. Maybe fear of losing – two-thirds of voters don’t want yet another poll, and independence support is where it was in 2014. Around 400,000 nationalists seem to dislike the EU as much as the UK  and might not vote to leave the UK just to join the EU again. So despite what Alex Salmond says, the prospects of another referendum are not hopeful for the SNP and a second defeat would surely be fatal to the cause.