Parliament will this week begin debating and scrutinising the UK Internal Market Bill, which the Northern Ireland Secretary has already acknowledged will, if passed in its current form, place the UK in breach of international law. When the bill reaches the upper chamber, what sort of treatment will it receive? Might the Lords block it? Unit Director and Lords expert Meg Russell offers her view.

After an emergency meeting, the European Commission vice-president demanded that the UK withdraw the plans. The Irish Taoiseach described them as ‘extremely divisive – and dangerous’, while the US House Speaker Nancy Pelosi warned that breaching international law would mean ‘absolutely no chance of a US-UK trade agreement’.

There are clear questions over whether such a controversial bill – whose Commons second reading is on Monday – can secure parliamentary approval. Specifically will it, as some suggest, be blocked by the House of Lords? A prior question is whether these provisions will make it through the House of Commons. Despite Johnson’s majority, Conservative dissent is unusually intense. This is unsurprising since, as many have recently quoted, that most iconic of Conservative prime ministers Margaret Thatcher consistently emphasised respect for the rule of law as a core Conservative value.

There is actually a prior question even to this, regarding whether the Commons will actually be asked to approve the offending clauses. In parliament the ‘law of anticipated reactions’ generally applies: sensible governments facing a likely Commons defeat will retreat on legislation if they can. When Charles Walker, vice-chair of the backbench 1922 Committee, was asked whether Conservative MPs would vote against the bill (21:18), he responded ‘I doubt we are to get to the stage where we are asked’. This implied that the Prime Minister would hear the drumbeats, and back down.

END_OF_DOCUMENT_TOKEN_TO_BE_REPLACED

Recent news has been dominated by Dominic Cummings’ lockdown trip to Durham. As a serial rule-breaker, he seems intent on flouting the maxim that ‘when the adviser becomes the story, the adviser must go’. But with MPs returning today, other fundamental political rules may not be so easily broken, writes Meg Russell. All Prime Ministers depend on their backbenchers for support and, with Conservative MPs in open revolt over Cummings, Johnson’s backing for him may yet become untenable. In the Westminster system MPs are ultimately in charge, and there are ways in which they could assert their position.

The Prime Minister’s adviser Dominic Cummings doesn’t like to follow the rules. That’s not necessarily a statement on his lockdown-breaking trip to Durham – disdain for established rules, and specifically for conventional wisdom that can’t be directly enforced, is what Cummings has long been known for. For some, it’s seen as part of his ‘genius’. From flying a giant inflatable white elephant over the north-east during a referendum that destroyed Labour’s plans for English regional devolution, to the audacious ‘£350 million a week’ for the NHS on the Vote Leave battlebus, to the long-planned ‘people versus parliament’ election of 2019, his boundary-stretching has often proved a winning formula, and delivered for Boris Johnson.

Cummings has long shown particular disdain for traditional political institutions, and their old ways of doing things. He’s well-known for wanting to pursue radical reform of the civil service. Conservative Brexiteer MP Steve Baker, who was among the first to call for him to quit, credits Cummings with Johnson’s attempt to prorogue parliament for five weeks, which was overturned in the Supreme Court. That move, like several others associated with Cummings, indicated his view that conventions, or the ‘accepted way of doing things’ count for nothing, while all that matters is the letter of the law. Other examples include suggestions to ‘pack’ the House of Lords with hundreds more Brexit-supporting peers, or to advise the Queen not to sign a rebel bill into law. Indeed ‘Downing Street sources’ went even further late last year, suggesting that Johnson might refuse to abide by a law passed by parliament. END_OF_DOCUMENT_TOKEN_TO_BE_REPLACED

The 2019 parliament has passed its first statute: the European Union (Withdrawal Agreement) Act 2020. Unusually for a major constitutional bill it was approved unamended. Does this demonstrate the shape of things to come, with an enfeebled parliament under Johnson’s majority government? Lisa James and Meg Russell argue that the WAB was not a typical bill, and the circumstances were far from normal. Even under majority government parliament is far from powerless, and the full dynamics of the new situation may take some time to play out.

1. The Act passed easily – but the circumstances were unusual

The EU (Withdrawal Agreement) Act 2020 (the WAA or – before it gained Royal Assent – the WAB) passed with remarkable ease and speed. A 100-page bill implementing the Withdrawal Agreement, it was packed with detailed provisions on everything from citizens’ rights to the operation of the Joint Committee. Nonetheless, following just 11 days’ scrutiny, it passed wholly unamended: five government defeats in the Lords were swiftly overturned when the Bill returned to the Commons.

Comparison with a key previous piece of Brexit legislation – illustrated in the table below – shows how uneventful the WAB’s passage was in relative terms. The EU (Withdrawal) Act 2018 was similar in scope and complexity, but had a far rockier passage. During 36 days’ scrutiny the government was defeated 16 times, including a rare defeat in the Commons. By the time it passed, it had been so heavily amended – by backbenchers, opposition parliamentarians and ministers themselves – that it was 63% longer than when first introduced. 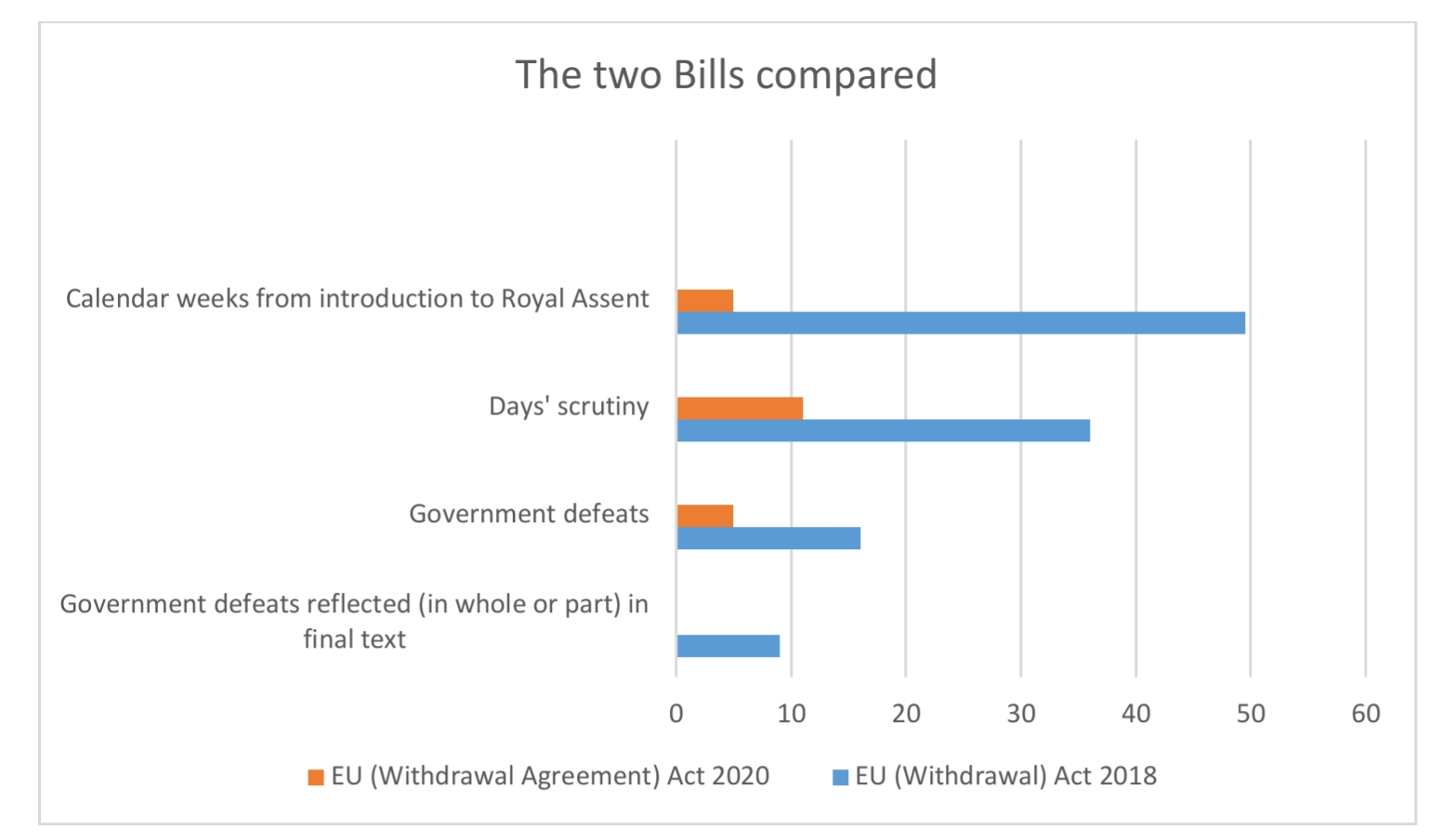 END_OF_DOCUMENT_TOKEN_TO_BE_REPLACED

The 2019 general election is now complete, but there is still plenty to say about the campaign, the rules that governed it, and the new parliament it has produced. Luke Moore summarises the contributions at our final seminar of 2019, where Unit staff were joined by other experts to dicuss the lessons of the election.

On Monday 16 December the Constitution United hosted an event entitled Election Replay with the Experts, at which four leading political scientists, including the Director and Deputy Director of the Constitution Unit, looked back on the 2019 general election. The issues discussed included polling, women’s representation, the rules of the electoral game, and the effect of the election on the new parliament. The event was chaired by Unit Research Associate Lisa James.

Ben Lauderdale, Professor of Political Science at UCL, started the evening by discussing the performance of polling at the election. During the election campaign Lauderdale had been involved in producing the much-discussed ‘MRP’ (multilevel regression and post-stratification) polling used to predict constituency results. His central message was that after two general elections — in 2015 and 2017 — in which some of the polls proved to be significantly out of step with the results, polling for the 2019 election is largely a non-story, as most pollsters were on target in their predictions. Further, the accuracy of the polls meant that the media was (in retrospect and in Lauderdale’s view) discussing the right topics during the election campaign. The most important of these was the prospect of a Conservative majority, but also the specific demographic and geographic weaknesses of the 2017 Labour coalition. While the terminology was a bit reductive and silly, it was not wrong to have focused on the vulnerability of Labour’s ‘red wall’ and Conservative appeals to ‘Workington man’.  END_OF_DOCUMENT_TOKEN_TO_BE_REPLACED

Media coverage in this election has been dominated by the Conservatives and Labour, and their competing policy plans. But a key difference between the parties is that, while a Conservative majority government is clearly possible based on the polls, a Labour majority government is not. Hence a Labour-led government would need to negotiate its policy with other parties, which would soften its stance. Robert Hazell and Meg Russell reflect on the lack of coverage of these questions, and what a Labour-led government would actually look like – in terms of personalities, policies and style.

Consistent opinion poll evidence during the general election campaign suggests that there are two possible outcomes: a majority Conservative government led by Boris Johnson, or a hung parliament. In the event of the latter, Johnson might still remain Prime Minister, but he has few allies – even having alienated Northern Ireland’s DUP. So a hung parliament might well result in a government led by Labour, even if the Conservatives are the largest party. But one thing is clear: nobody is really expecting a Labour majority government.

Consequently, particularly as the polls have failed to shift into majority Labour government territory during the campaign, it is strange that so little attention has been given to the question of what a Labour-led government might actually deliver in policy terms. To navigate policy through a hung parliament this would need to be accepted by other parties. In some areas – notably the commitment to a referendum on Brexit – the parties agree; but in other areas there may be less agreement. So whilst significant attention has been paid to the radicalism of Labour’s manifesto, a hung parliament – which might lead to a minority Labour government, or less likely (given statements from the Liberal Democrats and SNP) a formal coalition – would inevitably result in some dilution. As noted in the Constitution Unit’s 2009 report on minority government, hung parliaments ‘[entail] a greater degree of compromise and concession than leaders of governments at Westminster are used to’.

Thus focus on Labour’s economic policy – such as its tax or nationalisation plans – might usefully have been tempered by journalists asking questions of the other parties about the extent to which they would accept such plans, or how they might be softened as a result of negotiation. In a country where hung parliaments are more frequent, debate about the likely compromises between parties would be far more upfront during the campaign. Instead, the UK’s legacy of single-party majority government (notwithstanding the fact that this situation has applied for just two of the last nine years) has led to parties and journalists alike avoiding such questions. This, in turn, risks leaving the public ill-informed about the real prospects post-election. END_OF_DOCUMENT_TOKEN_TO_BE_REPLACED