We know there will be an election on 12 December, but the outcome, in terms of parliamentary seats and who will form the next government, remains uncertain. Robert Hazell and Harrison Shaylor answer some of the key questions about what happens if the election creates another hung parliament.

With an increasingly volatile electorate, and uncertain forecasts in the polls, it is possible the 2019 election will result in another hung parliament. Although bookmakers currently have a Conservative majority as comfortably the most likely election result, and the Conservatives are currently polling around 11 points ahead of Labour, a hung parliament is by no means out of the question. It would be the third hung parliament in four general elections. This explains what lessons can be learned from our previous experience of hung parliaments at Westminster and around the world. It addresses questions such as how a new government is formed, how long formation of that government will take, what kinds of government might emerge, and what the most likely outcomes are.

How common are hung parliaments in other countries?

In most democracies across the world, single party majority governments are the exception. Whereas the ‘first-past-the-post’ (FPTP) voting system used in the UK has had the tendency to encourage adversarial two-party politics and majority government, this is far from a default setting. Proportional representation tends almost always to produce coalitions: many countries in Europe currently have a coalition government.

Recent years have shown that, even in countries using FPTP, hung parliaments can occur quite frequently. In Canada, whose parliament uses the same electoral system as Westminster, there were 10 minority governments in the 20th century. There have already been four since 2000, including the incumbent minority government led by Justin Trudeau, formed after the Liberals lost their majority in the October 2019 federal election.

What is the experience of hung parliaments at Westminster? 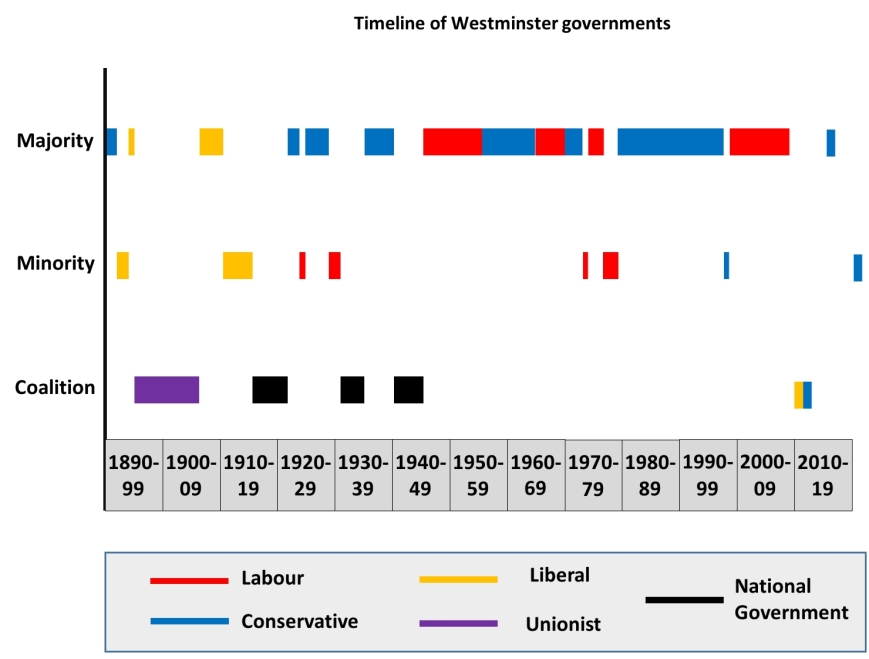 Westminster has more experience of hung parliaments than is generally recognised. There were 20 governments in Westminster in the 20th century: four were coalitions, and six were minority governments. But single party majority governments dominated after the Second World War. The 2010 coalition government was the first since 1945 and the product of the first hung parliament in 36 years. Since 2010, however, two out of three general elections have produced hung parliaments (and the fact that David Cameron’s Conservatives succeeded in obtaining an absolute majority in 2015 was a surprise).

Minority governments have traditionally been seen in the UK to be unstable, ineffective and short-lived. This hostility has been exacerbated for many by the 2017 parliament’s inability to implement Brexit; Boris Johnson has certainly tried to play to this view. But experience in other countries, and other parts of the UK, demonstrates that minority governments can be effective, so long as they do not try to govern in a majoritarian way. To give just one example from Scotland, the SNP minority government from 2007 until 2011 was stable, effective and achieved much with cross-party support, leading it to win an overall majority in 2011.

How is a new government formed in a hung parliament?

The political parties will negotiate with each other to see who is best placed to command the confidence of the new House of Commons. The Cabinet Manual explains that ‘Where a range of different administrations could potentially be formed, political parties may wish to hold discussions to establish who is best able to command the confidence of the House of Commons, and should form the next government’. If the parties involved in negotiations want support from the civil service, this can be organised by the Cabinet Secretary with the authorisation of the Prime Minister.

How long will the negotiations take?

The 2010 coalition government was formed over five days between 7–12 May after Nick Clegg had held talks with both David Cameron and Gordon Brown. The 2017 general election, however, shows that the formation of a new government may take significantly longer. It took Theresa May 17 days (from 9–26 June) to reach the confidence and supply agreement with the DUP. In European countries it generally takes weeks, and sometimes months, as shown in the bar chart below. 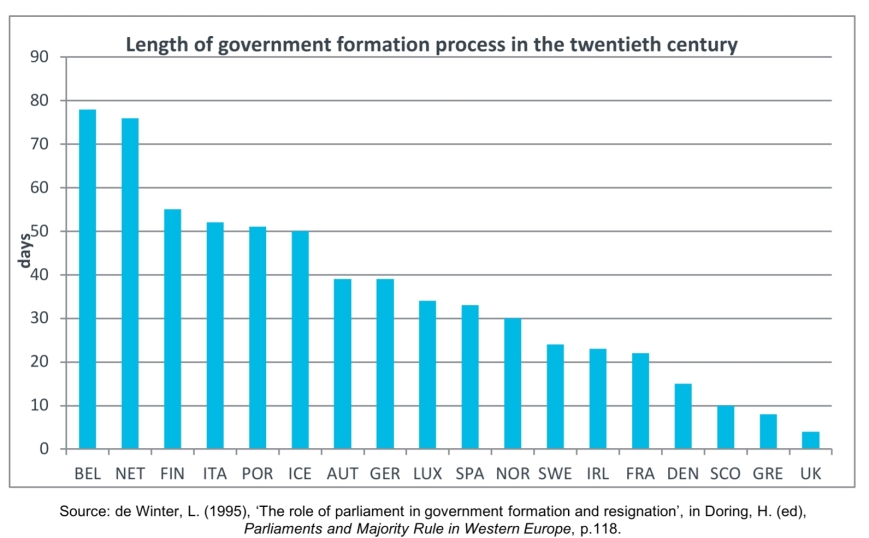 Who governs in the meantime?

The incumbent government and prime minister remain in office, but as a caretaker government. They must keep the wheels of government turning, but cannot do anything which would bind the hands of a future government. So they cannot initiate new policies, contracts, or public appointments. If it becomes necessary to do any of these things, the prime minister must consult opposition parties (as Alistair Darling did over an ECOFIN meeting in May 2010 that resulted in the creation of a new European Financial Stabilisation Mechanism).

Does the Queen decide who becomes prime minister?

The Queen formally appoints the prime minister, but does not decide who it will be. The Cabinet Manual explains that ‘the convention has been that the Sovereign should not be drawn into party politics, and if there is doubt it is the responsibility of those involved in the political process, and in particular the parties represented in Parliament, to seek to determine and communicate clearly to the Sovereign who is best placed to be able to command the confidence of the House of Commons. As the Crown’s principal adviser this responsibility falls especially on the incumbent Prime Minister’.

Does the largest single party get to form the government?

Not necessarily. The largest single party is the most likely candidate, but occasionally the next largest party might do so, with the support of the third-placed and/or minor parties. The last time this happened in the UK was following the December 1923 election, when the Conservatives were the largest party, with 258 seats, but the Labour party under Ramsay MacDonald formed a minority government with the support of the Liberals, even though Labour had almost 70 seats fewer than the Conservatives.

What if Boris Johnson loses his seat?

If the Conservatives win a majority, or gain sufficient support from other parties to form a government, Boris Johnson could remain Prime Minister. There is no law that Ministers must be members of parliament; it is only a convention. In practice a Conservative MP in a safe seat would be asked to resign (probably in return for a seat in the Lords), to enable a by-election with Johnson as the Conservative candidate. This is what happened when Alec Douglas-Home became Prime Minister in 1963, when for 20 days he was a member of neither House of Parliament until elected for the vacant seat of Kinross and West Perthshire. Another precedent is Patrick Gordon Walker, who lost his seat in Smethwick in the October 1964 general election, but was nevertheless appointed Foreign Secretary by Harold Wilson and held that office for over 3 months until he lost a subsequent by-election in Leyton in January 1965. That second defeat led to his resignation.

What kinds of government can result from a hung parliament? 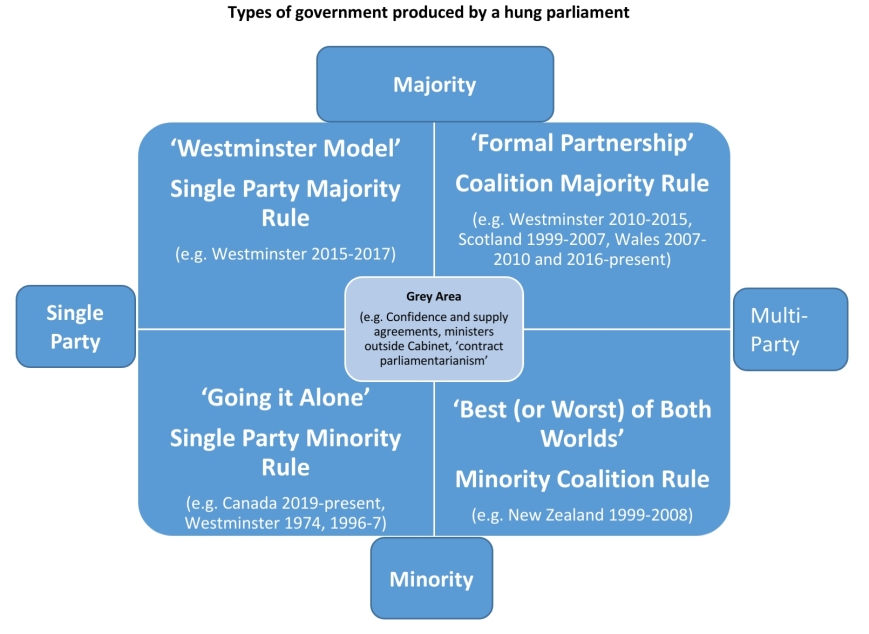 Coalition rule involves a closer and more formal arrangement than confidence and supply. In 2010 the Liberal Democrats joined the Conservatives in a coalition government, with Nick Clegg as Deputy Prime Minister, and five Lib Dems (including Clegg) in the Cabinet. One might say that while coalition rule makes life difficult within government but simple in parliament, minority government is the other way around.

The most likely outcomes

In the event of a hung parliament, the Conservatives might turn to the Brexit Party for support, should it end up with any MPs. Nigel Farage suggested as much during an interview with President Donald Trump on LBC on 31 October, and his continued use of ‘Leave Alliance’ rhetoric appears to leave the door open to a deal with the Conservatives. Johnson, however, has been less forthcoming. He has repeatedly stated that the ‘difficulty’ of doing deals with ‘any other party’ was that it ‘simply risks putting Jeremy Corbyn into Number 10’.

Jeremy Corbyn has been similarly distant. Nicola Sturgeon has repeatedly stated that, although the SNP would not cooperate with a Conservative government, they would be open to a confidence and supply agreement with Labour on the condition that a second referendum on Scottish independence be held within a year. Corbyn, however, has ruled out such a referendum in the first two years of his premiership. He has also repeatedly ruled out any agreements with other parties and rebuffed the advances of the ‘Remain alliance’ between the Lib Dems, the Greens, and Plaid Cymru.

The Liberal Democrat leader Jo Swinson has been bullish about coming to an agreement with either the Conservatives or Labour. Ed Davey, her deputy leader, appeared to leave the door open to working with a Conservative minority government and voting for Johnson’s Brexit deal if it meant securing a ‘People’s Vote’.

In the event of a hung parliament, the most likely outcomes all depend on the numbers. If the Conservatives could command a majority with the support of the Brexit party, they could do a deal to ‘get Brexit done’, including leaving with ‘no deal’ if necessary. But if the numbers in the new parliament indicate a majority for anti-Brexit or second referendum parties, a Labour-led administration is more likely, because Labour has more potential allies. It is more likely to be a minority Labour government than a coalition, because of Corbyn’s own inclinations, and the natural reluctance of the Lib Dems and the SNP to enter a coalition. If a Labour minority government relies on support from the SNP, this would almost certainly be conditional on holding an early second referendum on Scottish independence. If it relies on support from the Lib Dems, it could be conditional on Labour pledging to support Remain in a second People’s Vote on Brexit.

The Unit’s regular newsletter, Monitor, was published in November and covers the events that caused this election, as well as the other key constitutional events of the past four months. To download the new issue, click here.

Professor Robert Hazell was the first Director of the Constitution Unit, and closely involved with helping the Cabinet Office draft the Cabinet Manual. He is currently working on a comparative study of European monarchies, due to be published next year.

Harrison Shaylor is a research volunteer at the Constitution Unit.