Today Boris Johnson will give his leader’s speech at Conservative Party conference, doubtless with a central argument about the need to ‘get Brexit done’. MPs have been blamed for the failure to achieve this. But which MPs precisely are responsible? Meg Russell argues that opposition parties cannot normally be expected to deliver government policy. Instead, government backbenchers usually have that role. It is resistance from Conservative backbenchers – including Johnson himself and others promoted to his Cabinet – to supporting Theresa May’s deal that provides the most obvious reason for Brexit not having been agreed.

The slogan for this year’s Conservative Party conference, under the leadership of the new Prime Minister Boris Johnson, is to ‘get Brexit done’. Immediately following the Supreme Court ruling against the government last week, ill-tempered exchanges in the House of Commons saw the Prime Minister repeatedly blaming parliamentarians for failing to deliver Brexit. For example, Boris Johnson commented that ‘Politicians of all parties promised the public that they would honour the result. Sadly, many have since done all they can to abandon those promises and to overturn that democratic vote’. In contrast he pledged that ‘We will not betray the people who sent us here; we will not’, adding that ‘That is what the Opposition want to do’. Far stronger words, characteristically, have been ascribed to his chief adviser Dominic Cummings in blaming parliament for the Brexit impasse. Several papers have reported Cummings as suggesting that it was ‘not surprising’ that people are angry with MPs, as they have failed in their duty to get Brexit done. Given the risks that such comments further stoke such public anger against our democratic institutions, it seems important to consider exactly which MPs primarily bear responsibility for the failure to agree a Brexit plan.

First, a quick recap on what happened in the months before Johnson took office. His predecessor, Theresa May, pursued a lengthy negotiation with the EU27 – resulting in a withdrawal agreement that was signed off on 25 November 2018. Under the terms of Section 13 of the European Union (Withdrawal) Act, this deal was then put to an initial ‘meaningful vote’ in the House of Commons on 15 January 2019. However, it was defeated by MPs by a whopping 432 to 202 votes. The Prime Minister subsequently brought the deal back for a second such attempt on 12 March. By this point various MPs had been brought round to supporting the deal; but it was nonetheless still heavily defeated, by 391 votes to 242. A third and final attempt at getting the House of Commons to agree the deal then occurred on the originally-planned Brexit day, of 29 March 2019. This was not a ‘meaningful vote’ under the terms of the Act, as Speaker John Bercow had hinted that such a move could be ruled out of order – on the basis that MPs cannot just repeatedly be asked to vote upon the same proposition – but it was again an in-principle vote on the deal. Again the gap between supporters and opponents narrowed, but the government was defeated by 344 votes to 286 – a margin of 58. Hence a further 30 MPs would have needed to switch from opposing to supporting the deal in order for it to be clearly approved.

The links at the dates above show the breakdown of votes on each of these occasions. Opposition parties, including Labour, the Liberal Democrats and the SNP, consistently voted against the deal. It is these members at whom the Prime Minister primarily vents his anger. But it is important to remember that it is not normally the role of opposition parties – particularly in the UK system, and even more particularly on controversial matters – to assist the government in delivering its policies. The opposition emerged in British politics to ‘oppose the government, to criticize it, and to seek to replace it’, not to facilitate its survival. Instead, the key players in delivering government policy are, to state the obvious, government backbenchers. That is, members of the government’s own party – or parties, at a time of coalition. Since 2017, the Conservatives have been a minority government that has a ‘confidence and supply’ arrangement with the Northern Ireland Democratic Unionist Party (DUP). It is therefore to Conservative and DUP votes that one would normally look to find government support.

It is clearly well known that there have been significant divisions in the Conservative Party on Brexit, and that there have been large backbench rebellions on this issue. The size of the defeat on 15 January was manifestly a product of that fact – on this first attempt to approve the deal, 118 Conservative MPs (more than one third of the total) voted against the government. On the second attempt, the number of rebels declined to 75, and on the third attempt it was reduced to 34. On all three attempts, the DUP’s 10 MPs also voted as a block against the deal. Under any kind of normal analysis of parliamentary politics in the UK, it could hence reasonably be said that the deal failed to pass on all three occasions thanks to resistance on the government’s own side.

The implications from the Johnson team’s remarks, and from some key pro-Brexit organisations,  are that the failure to ‘get Brexit done’ can be laid at the door of a ‘Remainer parliament’. Potentially this could be true, if the Conservative MPs repeatedly voting against the Brexit deal secured over 10 months ago were predominantly Remain supporters. Some Conservative MPs sceptical about Brexit certainly did vote against the deal. But the opposition amongst all groupings declined across the period of the three votes, with more MPs willing to compromise.

For illustration, the left-hand side of the first graphic below shows how members of Boris Johnson’s Cabinet voted on the deal in each of the three key votes. Five Cabinet members, including Johnson himself, voted against it on the first two occasions that it was put to the House of Commons. Johnson, along with Dominic Raab and Grant Shapps, then relented on the third occasion, and voted in favour of the deal; however their Cabinet colleagues Priti Patel and Theresa Villiers did not. Jacob Rees-Mogg, the Leader of the House of Commons – who attends Cabinet, but is not formally a member – also voted against the deal twice, in his former backbench role as chair of the ‘hard’ Brexit supporting European Research Group (ERG), moving to support on 29 March. Among all the other members of the Cabinet, who supported the deal throughout, only Nicky Morgan was not at the time bound by collective ministerial responsibility. Any others would have needed to resign their government positions in order to vote against. Putting it differently, six of the seven senior ministers who came into government as part of the Johnson administration voted against the deal. 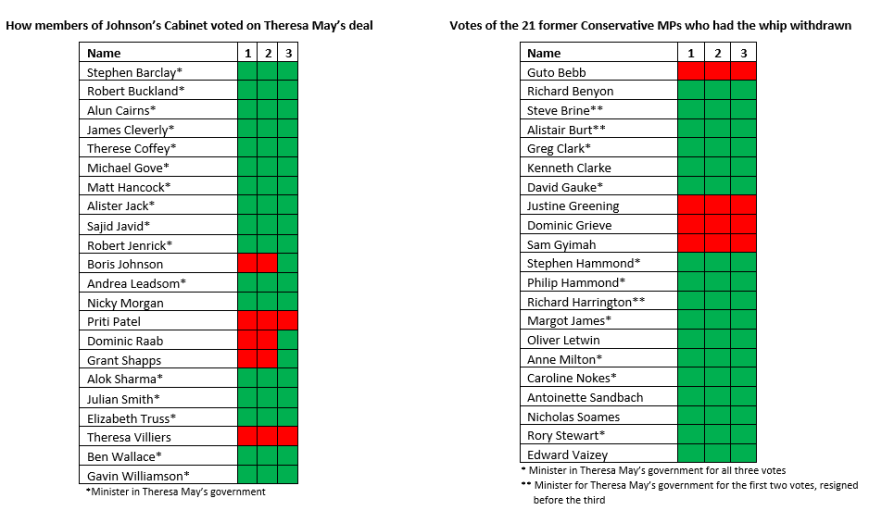 The current Cabinet contains 22 members of the House of Commons. This aligns almost perfectly with the 21 Conservative MPs who were punished by having the whip removed for voting against the Johnson government on 3 September. These latter members and their voting records on the deal are shown on the right-hand side of the figure, and some might expect them to be amongst the most disloyal to the Brexit cause. However, just four of them – Guto Bebb, Justine Greening, Dominic Grieve and Sam Gyimah – voted consistently against the deal. Hence support for the Brexit deal could on at least one measure be seen as higher among this group of 21 than it was amongst the current Cabinet. In addition, fewer of them were bound by collective ministerial responsibility. On the first two votes this applied to 11 of the 21 members. By the third vote, three had resigned from the government (in order to vote in favour of Oliver Letwin’s proposal to hold ‘indicative votes’ on Brexit). Hence without being bound by collective responsibility, six of these members wholly voluntarily voted for Theresa May’s deal on the first two occasions that it was put to the House of Commons, and on the third occasion nine such members did so.

The crucial vote could be seen as that taking place on 29 March 2019, when the majority against the government narrowed to 58, and a switch of votes amongst 30 opponents to a position of support would have reversed the result. The second graphic shows the 34 Conservative MPs who voted against the government on this third occasion, dividing them into those who can safely be seen as having opposed the deal on the basis that they preferred a ‘harder’ version of Brexit, and those opposing because they wanted a ‘softer’ Brexit or Remain (those highlighted are the members already identified in the previous tables). Notably, only six of the opponents (those named above, plus Jo Johnson and Phillip Lee) opposed from a broadly Remain/’soft Brexit’ position. The other 28 could be seen as ‘hard’ Brexit supporters (many of them members of the ERG). Had this latter group – of ostensibly Brexit supporters – voted with the government rather than against it, this would have been nearly, but not quite, sufficient for the result to be overturned. But this still does not mean that an argument blaming ‘Remainers’, or the opposition parties, from preventing Brexit holds up. Also voting against the deal on this occasion, as they did twice previously, were the 10 members of the DUP. Had this Brexit-supporting (and ostensibly government-supporting) group voted with Theresa May and her ministers on 29 March, the deal would have been approved.

It is worth briefly noting (as can be explored by following the links above) that there were other complexities in these votes. In particular, while the opposition parties mostly voted as blocks, the deal did actually find some support among opposition members. On 29 March, five Labour members (Kevin Barron, Rosie Cooper, Jim Fitzpatrick, Caroline Flint and John Mann) voted with the government, as did former Labour members Ian Austin and Frank Field. In particular, Cooper and Fitzpatrick had moved to support the position – clearly in a spirit of compromise to ‘get Brexit done’ – unlike the 28 Conservative ‘hard Brexit’ supporters, two of whom are now Cabinet members.

Amidst these debates, there are clearly key arguments about what Brexit means: whether Theresa May’s deal was somehow ‘Brexit in name only’, in a sense that is fundamentally little different to remaining in the EU. Boris Johnson’s government still claims that it wishes to, and can, negotiate a preferable Brexit deal. Meanwhile, the alternative that the government’s key opponents are now pursuing, most notably through the Benn-Burt Act (dubbed the ‘surrender’ or the ‘safeguard’ Act, depending different points of view), is a blocking, not of Brexit itself, but of a ‘no deal’ on 31 October. This outcome, according to most independent analysis, is likely to have various damaging consequences. There are hence at least three theoretical versions of Brexit: Theresa May’s deal, a notional alternative deal, and a ‘no deal’ Brexit. While the battles of recent weeks have shown the House of Commons determined to prevent the third of these outcomes, the failure of the first – as the above analysis shows – cannot be laid at the door of parliamentary ‘Remainers’. It is yet to be seen whether the second option actually exists.

Professor Meg Russell is Director of the Constitution Unit, and a Senior Fellow at the UK in a Changing Europe studying ‘Brexit, Parliament and the Constitution’. She is also the co-author of of Legislation at Westminster: Parliamentary Actors and Influence in the Making of British Law.

8 thoughts on “Which MPs are responsible for failing to ‘get Brexit done’?”