In 1973, the UK government organised the country’s first referendum, on the subject of whether or not Northern Ireland should remain part of the UK. Now, as Brexit and its potential consequences make another border poll look like an increasing possibility, David Torrance looks back on the poll, its background, and its later constitutional significance.

The first constitutional referendum in the history of the United Kingdom took place on 8 March 1973. It was held nearly four years after the beginning of ‘The Troubles’ – a sharp deterioration in the security and political situation in Northern Ireland.

What became known as the ‘border poll’ (although it was also called a ‘referendum’ or ‘plebiscite’, no one could quite agree on terminology) emerged as a means by which to ‘take the border out of politics’, or so it was hoped. In discussions with the Government of Northern Ireland (NIG) on 22 March 1972, the UK government proposed transferring responsibility for law and order from Belfast to London, phasing out internment, and periodic plebiscites.

The last two were, in principle, acceptable to the NIG, but an erosion of its ‘transferred’ powers under the Government of Ireland Act 1920 was not. The Prime Minister of Northern Ireland (Brian Faulkner) and his Cabinet later resigned, and on 30 March the Parliament of Northern Ireland – known as ‘Stormont’ – was prorogued and Direct Rule from Westminster introduced for the first time since 1921.

‘We… propose in due course to invite Parliament to provide for a system of regular plebiscites in Northern Ireland about the Border, the first to be held as soon as practicable in the near future and others at intervals of a substantial period of years thereafter.’

In effect, Heath was proposing to transfer the principle of ‘consent’ from the prorogued Parliament of Northern Ireland (enshrined in the Ireland Act 1949) to its people, ‘the Border’ representing a proxy for a much broader constitutional question.  END_OF_DOCUMENT_TOKEN_TO_BE_REPLACED

Yesterday, in the first of two blogs on the Good Friday Agreement, Alan Whysall discussed where the Agreement had gone wrong and the benefits it has brought Northern Ireland since it was signed in April 1998. In this post, Alan looks at the future of the Agreement, a document he was involved in negotiating and implementing during his time as a civil servant at the Northern Ireland Office.

As conflict with the EU mounted over the Northern Ireland issue, some pro-Brexit voices in Great Britain began to argue that the Good Friday Agreement (‘the Agreement’) had ‘run its course’. They proposed no alternatives, however, for a position that broke a 20 year consensus in mainstream British politics.

Few in Northern Ireland, beyond established ultras, have gone so far. But some, predominantly unionists, argue in the short term for direct rule; some for changes to the mechanisms of the Agreement. There is also increasing talk of a border poll opening the way to a united Ireland.

Some see direct rule from Westminster as a good government safety net that Northern Ireland can fall back on, as in the past. From one perspective, it is remarkable that has not happened. Extraordinarily, no one has been in charge of government for over a year, as though having government is discretionary. The civil service carries out the administration on the basis of established policy, in a legal quagmire.

Nonetheless the British government has resisted the temptation to reinstate full-blown direct rule. This is understandable, as its own role would be seriously contested, given its dependence on the DUP for a Commons majority; so would the role the Agreement foresees for the Irish government. Most damagingly, it might be seen as the end of efforts to revive the institutions, unleash further negativity and probably drive the best people from politics. Direct rule, once turned on, is hard to turn off.

The present situation cannot endure indefinitely. At some point, much more government will have to be done. END_OF_DOCUMENT_TOKEN_TO_BE_REPLACED

The latest issue of Monitor, the Constitution Unit’s regular newsletter, was published today. The issue covers all of the major UK constitutional developments over the past four months, a period that has seen the EU (Withdrawal) Bill pass from the Commons to the Lords; the failure of talks in Northern Ireland; and a significant government reshuffle. Abroad, Ireland is considering a permanent constitutional change and Japan has seen a constitutional first as its current emperor confirmed he is to abdicate. This post is the opening article from Monitor 68. The full edition can be found on our website.

The UK is experiencing a period of deep constitutional uncertainty. In at least four key areas, structures of power and governance are in flux. 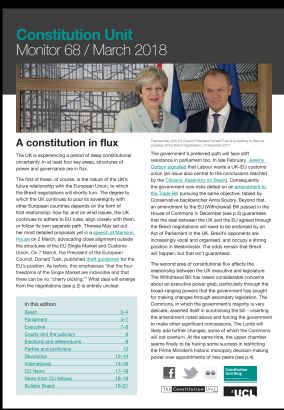 The first of these, of course, is the nature of the UK’s future relationship with the European Union, to which the Brexit negotiations will shortly turn. The degree to which the UK continues to pool its sovereignty with other European countries depends on the form of that relationship: how far, and on what issues, the UK continues to adhere to EU rules, align closely with them, or follow its own separate path. Theresa May set out her most detailed proposals yet in a speech at Mansion House on 2 March, advocating close alignment outside the structures of the EU Single Market and Customs Union. On 7 March, the President of the European Council, Donald Tusk, published draft guidelines for the EU’s position. As before, this emphasises ‘that the four freedoms of the Single Market are indivisible and that there can be no “cherry picking.”’ What deal will emerge from the negotiations is entirely unclear.

The government’s preferred path will face stiff resistance in parliament too. In late February Jeremy Corbyn signalled that Labour wants a UK–EU customs union (an issue also central to the conclusions reached by the Citizens’ Assembly on Brexit). Consequently the government now risks defeat on an amendment to the Trade Bill pursuing the same objective, tabled by Conservative backbencher Anna Soubry. Beyond that, an amendment to the EU (Withdrawal) Bill passed in the House of Commons in December guarantees that the deal between the UK and the EU agreed through the Brexit negotiations will need to be endorsed by an Act of Parliament in the UK. Brexit’s opponents are increasingly vocal and organised, and occupy a strong position in Westminster. The odds remain that Brexit will happen, but that isn’t guaranteed. END_OF_DOCUMENT_TOKEN_TO_BE_REPLACED

Northern Ireland remains without a government. Dialogue has resumed, but the climate is conflictual, and exacerbated by Brexit. The foundations of the Good Friday Agreement may now be seriously shaken. There is some talk of a deal being in prospect, but room for doubt that anything lasting can be achieved. Alan Whysall provides an update and suggests that handling of Northern Ireland once again needs the priority, care, understanding and courage it received from previous governments.

My previous blog set the scene: two polarising elections – to the Northern Ireland Assembly and then Westminster – have failed so far to restore devolved government, following its collapse at the beginning of the year; rather, they reinforced the position of the two big parties, the DUP and Sinn Féin, at the expense of moderates. The nationalist vote, which had been shrinking, has bounced back, which along with the prospect of Brexit has renewed the focus of Irish nationalism on unity. Since Sinn Féin do not take their seats in the Commons and the SDLP no longer has any seats, it is now without any nationalist voice.

Where are we now?

At Westminster, following the election, the Conservative party and DUP reached a confidence and supply agreement. The DUP will support the government throughout this parliament on votes on confidence and finance, as well as Brexit and national security. However, the DUP are to ‘have no involvement in the UK government’s role in political talks in Northern Ireland’. The government will provide extra funding for Northern Ireland totalling about £1 billion over the coming years. It seems to be linking the extra spending to resumed devolution, the DUP denying such a linkage. The deal has been much criticised, Moody’s citing it among reasons for downgrading the UK’s debt rating. Gina Miller and others are mounting a legal challenge, with unclear prospects of success.

Meanwhile the civil service in Northern Ireland, with no ministers to give it direction, aims to ensure ’business as usual‘, but is unable to launch significant new programmes, projects or policies. No budget has been set for this year. The Secretary of State has laid down ‘indicative’ allocations, presumably by way of giving political cover, since he does not have legal authority of any kind over the devolved domain.

According to the Secretary of State, if the situation ‘is not resolved within a relatively short number of weeks will require greater political decision-making from Westminster… to begin with legislation [for] a Budget”.

In that context, he would consider whether Assembly members should still be paid, since they do not meet – one of the few levers the government really has. The DUP leader Arlene Foster, though, found this offensive. Is this a veto?

The Secretary of State spoke of a ‘glidepath’ to greater UK government intervention, implying perhaps, though he did not use the term, a reversion to direct rule, the classic regime of which was considered in an earlier blog.

Strains are emerging between the British and Irish governments over this: after the Irish foreign minister Simon Coveney said there could be no British-only direct rule, the British government sharply riposted that there would be no joint authority, which Coveney had not suggested. Some saw the hand of the DUP here. Under the Good Friday Agreement, the minister is right – Dublin would have substantial rights to make representations about British government actions during direct rule, though without prejudice to sovereignty.

END_OF_DOCUMENT_TOKEN_TO_BE_REPLACED

The latest crisis in Northern Ireland looks like yet another déjà vu. It’s not that the situation never changes but the remedy offered by London remains stubbornly the same, writes Robin Wilson.

Events in recent weeks in Northern Ireland, including a feud in the IRA in Belfast and tottering power-sharing institutions at Stormont, have highlighted once more that, far from being a ‘post-conflict’ society with an ‘historic’ peace agreement, it remains a region in pre-post-conflict mode where history isn’t over just yet.

This is not, however, due to the ‘ancient hatreds’ often projected on to this complex canvas by the simplifying gaze of superficial observers. As the all-too-similarly dysfunctional nature of post-war Bosnia-Herzegovina and Lebanon demonstrates, it is the consistent application of stereotyping perspectives by representatives of the ‘international community’—the most powerful states with a regional investment—which is the real problem. In all three related agreements—Belfast (1998), Dayton (1995) and Taif (1989)—it has led to the same outcome.

The first step is a conceptual hoovering up of the unique individual diversity of the populace into communal tribes—Protestants and Catholics; Serbs, Croats and ‘Bosniaks’; Maronites, Sunni and Shia Muslims. This fails to recognise the fundamental difficulty that, as the late Italian political scientist Norberto Bobbio pointed out, every democratic constitution is based on the individual citizen. The inevitable victim of this Realpolitik is universal norms: every human rights convention, including those enshrining minority rights, requires the individual to be the rights-bearer; and the rule of law is meaningless unless state institutions are impartial among diverse citizens.