Parliament is currently in recess but its work continues, with select committees moving to remote hearings, and the Speaker promising to move, if only temporarily, towards a ‘virtual parliament’. David Natzler, who spent almost 40 years working in the House of Commons, draws on his experience to suggest how issues relating to the remote conduct of oral questions, voting, committees, and other key matters, might be resolved before parliament returns in late April.

In my blog of 23 March, I suggested that parliament would be judged on how well it had dealt with COVID-19. Over the past fortnight parliament has passed the Coronavirus Act and Commons select committees have held several hearings (see below) in procedurally unique circumstances. Developments in other parliaments and institutions have given an indication of how Westminster might adapt in the coming months. And there have been growing calls for business – in  some radically different form – to be resumed well before 21 April, when parliament is due to reassemble following its standard, if slightly extended, Easter break. The proceedings in both Houses on 23-25 March are of course available to read in Hansard. They do not seem to have been widely reported in the press, save for the observation that there were no votes.

On 27 March the Speaker, Sir Lindsay Hoyle, wrote a letter to all members of the House of Commons. The letter confirmed that he would be considering several practical measures to enable the number of members present in the Commons chamber at any one time to be reduced. These measures included advance publication of the order of speaking in debate, which the Chair has hitherto not revealed, thus requiring members to attend the debate and wait until called. In the past it has been suggested that the draft list be published, as it is in many other parliaments; this already happens in the House of Lords. If this were introduced it could take some persuasion to return to the existing practice, which allows the Chair to show some flexibility in response to debate.

Oral and written questions and statements

The Speaker’s letter also envisages possible adaptations of the oral question regime, conceivably allowing for questions and supplementary questions to be posed remotely by absent members. Advance submission by MPs of their desire to be called to ask a supplementary question following a statement or urgent question is also canvassed as a possible change. And the Speaker gave a strong signal that he would expect the government to allow for answers to written questions to be given during any future extended period of adjournment, much as happened in the mid-2000s when September sittings were abandoned for several years (see Standing Order 22B and Erskine May 22.4, footnote 3). This was repeated in his letter to the Leader of the Commons on 2 April. END_OF_DOCUMENT_TOKEN_TO_BE_REPLACED

Forty years ago, the House of Commons revolutionised the way in which it scrutinises government by creating departmental select committees so that each section of government now receives continual and detailed scrutiny by MPs. In June, a two-day conference was held to explore the past, present and future forms and functions of these committees. Rebecca McKee and Tom Caygill summarise some of the event’s key themes and contributions.

Almost 40 years to the day since the debate to establish the first departmental select committees in late June 1979, the House of Commons and the Study of Parliament Group held a two-day conference in parliament. The conference showcased the work of the committees, reflecting on changes since 1979 and looked forward at emerging challenges and how committees may need to evolve for the future.

There were 15 panels over two days, with a range of speakers from academia, Whitehall, the House of Commons and civil society. In this post we consider themes from the conference, looking specifically at the past, present and future of departmental select committees.

Looking back at 40 years of select committees

The history of select committees

With 40 years of departmental select committees to explore, the panel ‘History, origins and early days of select committees’ began by looking back to their inception in 1979. The panel heard contributions from Philip Aylett (clerk); Professor Gavin Drewry (Royal Holloway, University of London), Mike Everett (clerk), Sir David Natzler (former Clerk of the House), and was chaired by Oonagh Gay, (formerly of the Parliament and Constitution Centre). 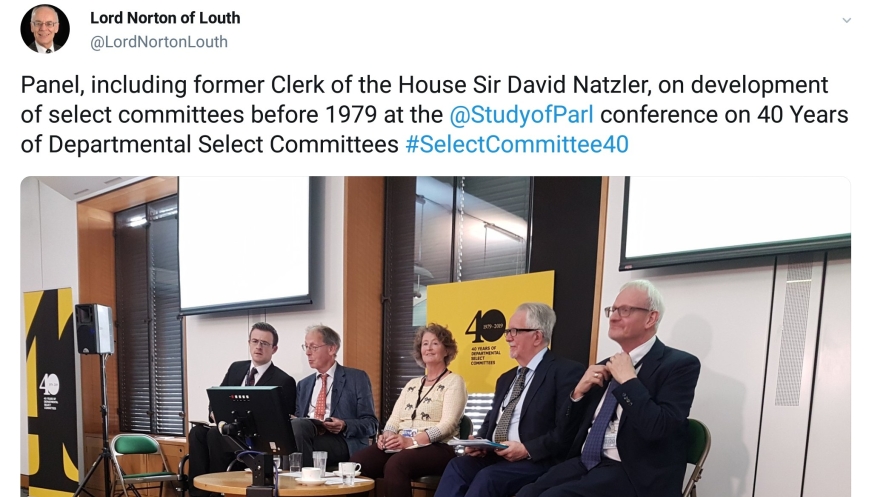 The session began with a discussion of the work conducted by the Study of Parliament Group in helping to develop and monitor early select committees. It was noted that the group did not always speak with one voice. Bernard Crick, one of the group’s founders, initially argued against specialist committees.

However, these committees were not a complete novelty. Committees have existed since the late 13th century, when the Committees of Triers and Examiners of Petitions were established. Their usage expanded over the centuries. A dramatic increase occurred in the 16th century following the designation (in 1547) of a special Committee Room in the House of Commons.

The panel then turned to the 20th century. They argued that the 1960s were a dark age for select committees; the Estimates Committee existed but had a very narrow remit and committees avoided policy issues. In 1965 however, the Procedure Committee recommended a greater specialisation of select committee work and in 1966 discussions began between parties to develop specialist committees. Harold Wilson argued that select committees should expand their remit beyond financial questions to cover policy issues also. By the 1970s a different role started to emerge, similar to the Committees we recognise today. END_OF_DOCUMENT_TOKEN_TO_BE_REPLACED