A year after the House of Lords backed a major refurbishment of the Palace of Westminster, Alexandra Meakin discusses the relationship between the UK’s upcoming departure from the EU and the plans for MPs and peers to temporarily move out of their current home.

Anna Soubry: ‘We have to grasp this, do the right thing, and – I cannot believe I am going to say this – but in this instance, in supporting amendment (b), absolutely everybody vote leave.’

Over the past few months parliamentary proceedings have taken centre stage in our nation’s consciousness. The legislative and political machinations surrounding the UK’s planned exit from the European Union have turned the Palace of Westminster into a theatre offering endless drama and occasional farce. Indeed, the wider area around the Palace has been absorbed into the set: the pro and anti-Brexit protests in Parliament Square; the broadcasters’ gazebo village on College Green; and even the steps outside St Stephen’s entrance, which hosted an impromptu press conference. The audience following every scene, however, couldn’t fail to observe the scaffolding covering the set, the external sign of a dilapidated building, where the infrastructure is decades past its expected lifespan. Alongside the preparations for departing the EU, MPs and peers are also planning for a further departure: leaving the Palace of Westminster to enable a major refurbishment programme.

After decades of neglect, the scale of the problem inside Parliament was outlined in a 2012 report, which noted ‘if the Palace were not a listed building of the highest heritage value, its owners would probably be advised to demolish and rebuild’. On receipt of the report the governing bodies in the Commons and Lords agreed that ‘doing nothing was not an option’. They ruled out the construction of a new parliamentary building, and committed instead to further analysis of the options for repairs, and specifically whether the work could be carried out while both Houses continued to sit in the Palace.

A rolling programme, however, was found by the subsequent review, the Independent Options Appraisal, to be the most expensive delivery option: with a projected cost of £5.8 billion, compared to £3.5 billion if both chambers moved out of the building: a full decant. Furthermore, a rolling programme entailed not just higher costs, but also a higher level of risk: with a high chance of catastrophic failure of the infrastructure over the multi-decade timespan of the programme. As a result, the Joint Committee on the Palace of Westminster, established to consider the future of the building, came to a ‘clear conclusion’ in 2016 that:

The Joint Committee were also clear about the urgency of the repair work:

‘The Palace of Westminster, a masterpiece of Victorian and medieval architecture and engineering, faces an impending crisis which we cannot responsibly ignore […] Unless an intensive programme of major remedial work is undertaken soon, it is likely that the building will become uninhabitable.’

Despite the imminent risk to the Palace, progress on the Joint Committee’s recommendations, and the proposed Restoration and Renewal Programme (R&R) was slow. This was the result of many factors – the complex governance structure within Parliament, and concern about the media and public reaction to the cost of the works, to name just two. Brexit, however, was identified by many of the MPs, peers, and parliamentary officials I interviewed, as the one of the key reasons for the delay. Indeed, it had caused delays even prior to the 2016 EU referendum. The Joint Committee had been established in July 2015, and had been expected to report by the following spring. With their report almost completed, however, the Committee were asked to delay publication until after the referendum, which at that point was still expected to be a victory for Remain. The change of Prime Minister, and subsequent reshuffle pushed publication back to September 2016: but with a promise that the government would then allow time for a debate on the report. In fact, it took almost 17 months for the debate to be held: Brexit had, I was told, taken up all the bandwidth in government.

The impact of Brexit on R&R is not just about parliamentary time and government attention, but goes deeper, bringing in questions of political symbolism. For some MPs, the idea of leaving the Palace during R&R gave out the wrong message for a post-Brexit era. In a 2017 Westminster Hall debate Shailesh Vara MP said:

‘At the time of Brexit, when we seek to make new friends overseas and secure favourable trade agreements, do we really want to convey the image of a temporary building in the courtyard of another Government building? We have to take into account the soft-sell power of the iconic building that is Parliament. I put it gently to hon. Members that the selling power of this building far exceeds any figures for costs that have been produced here.’

In the same debate, Chris Bryant MP, who led the campaign for the R&R programme, reported that MPs had had argued against decant by telling him: ‘We need to put on a good show in times of Brexit. We can’t just meet in a car park’.

These arguments highlight how the symbolism of Palace of Westminster moves it beyond simply a building, and makes it part of the UK’s national identity. Sir Edward Leigh told me during an interview that leaving the building, particularly during Brexit would be ‘tearing the heart out of politics’:

‘Well it [the Palace of Westminster] is the iconic picture of the nation, famously on an HP sauce bottle, if you have a symbol of this country anywhere in Europe: you know Eiffel Tower for France, Brandenburg Gate for Berlin, House of Commons/Palace of Westminster for this country. So I think particularly with Brexit and all that going on, to move out for, well we’ve always argued it wouldn’t just be for four or five years, it would be more like eight or even ten years, or even 12 years, would be tearing the heart out of politics’.

When the House of Commons finally debated the R&R programme, similar arguments against leaving the Palace during Brexit were made. Sir John Redwood told the Commons (misquoting John Bright):

‘I agree with those who think there is something very special about this place and something important about it for our democracy. This is the mother of Parliaments and this building does have great resonance around the world, being associated with the long history of freedom, and the development of the power of voice and vote for all adults in our country. It would be strange indeed to be turning our back on that for a period, particularly when we are going through a big constitutional and political change in order to implement the wishes of the British people as expressed in the referendum. Particularly during this period, it is important that our visitors can come to be reminded of our national story and why we are where we are. All those of us who seek to represent people should be daily reminded of that national story when we come here’.

Sir John also compared his positions on decant and Brexit, telling colleagues: ‘having been entirely of the leave faith on the referendum issue, now, showing flexibility and how I am always influenced by the facts, I find myself firmly in the remain camp on this parliamentary discussion’. He wasn’t the only MP to do so: prominent Remain campaigner Anna Soubry made an emphatic call urging that ‘absolutely everybody vote leave’ on this particular issue. Speaker of the Commons John Bercow told me during an interview in September 2018 that ‘it’s often been joked about here in the House’ that ‘some of the most prominent leavers are the remainers’. The deep divisions in the Commons on Brexit now appeared to be replicated on the question of decant.

The potential correlation between Brexit and decant was borne out at the end of the debate, when MPs voted on an amendment tabled by the Chair of the Public Accounts Committee, Meg Hillier, which endorsed full decant. In a close vote, Hillier’s amendment succeeded by 236 votes to 220: exactly replicating the percentages of the EU referendum result.

Analysis of the division lists reveal that of the Members who voted, MPs who had declared their support for ‘Leave’ ahead of the EU Referendum were far more likely to oppose full decant, than those who supported Remain. Indeed, 87% of Brexit-supporting MPs voted against the Hillier amendment. 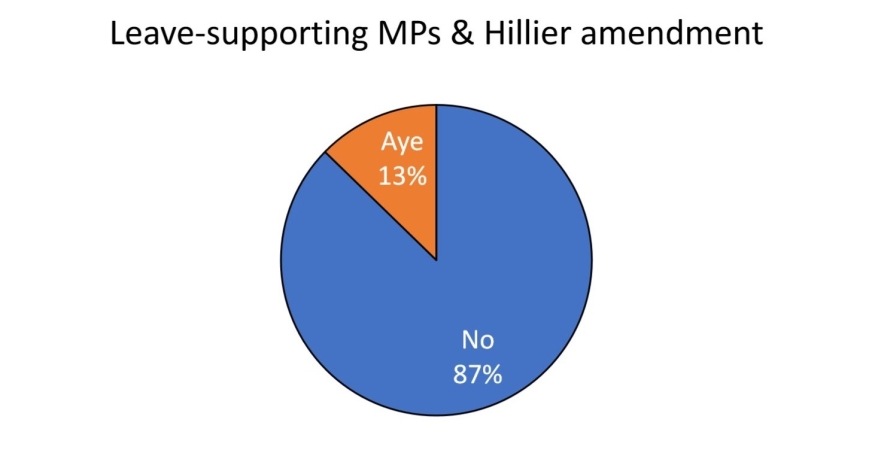 Of course, this was not universal: some prominent Brexit-supporting MPs did support full decant, most notably Transport Secretary Chris Grayling, who as Leader of the Commons had chaired the Joint Committee on the Palace of Westminster. And while Grayling’s successor as Commons Leader, Andrea Leadsom, who had also supported Brexit, voted against the Hillier amendment, she then voted for the motion as amended, keen to drive progress on R&R.

Correlation does not mean causation: there are multiple factors that affected the result of the vote on full decant, with the party-political split (a majority of Labour MPs voted for, a majority of Conservatives voted against), and gender (a majority of female MPs voted for, a majority of male MPs voted against) being two notable factors. But perhaps it isn’t surprising that parliamentarians who had signed up to a campaign based around the restoration of parliamentary sovereignty would also resist leaving the building that represented this sovereignty, even temporarily.

On 6 February 2018 the amended motion from the Commons was considered by the House of Lords. Interestingly, Brexit also played a part in this debate. A clear majority of peers speaking expressed support for moving out of the Palace to allow the works, with only a few expressing concerns about decant. One such peer, Lord Cormack, put his concerns aside however, arguing that the Lords should respect the primacy of the Commons on this issue, and on Brexit:

‘Before the Commons took its vote last week, I was minded to argue for remaining. I took advice from architects and others, all of whom said that it was an entirely practical course. But I have often said in this House, in debates on Brexit and on the size of your Lordships’ House, that we should defer to the elected House, and this is a case in point.’

With the support for decant clear, the Lords endorsed the Commons motion without a vote. A year on, and steady progress has been made on preparing for R&R, with temporary chambers planned for Richmond House (the Commons) and the Queen Elizabeth II Conference Centre (the Lords). There will be new sets for the ongoing drama at Westminster.

Alexandra Meakin is a Research Associate at the Sir Bernard Crick Centre for the Public Understanding of Politics at the University of Sheffield, and a former Committee Specialist on the Commons Public Administration and Transport Committees. This blog draws on interviews from her doctoral research on the Restoration and Renewal of the Palace of Westminster and parliamentary governance. She tweets as @A_Meakin