This week’s Labour Party conference leaves a further Brexit referendum firmly on the political agenda. In the sixth of a series of posts on the mechanics of such a vote, Jess Sargeant, Alan Renwick, and Meg Russell examine what rules and regulations should govern the referendum process, arguing that important changes are needed to facilitate a fair and transparent campaign.

If  a further referendum on Brexit is held, the rules governing how it is conducted would be of utmost importance. The UK’s standing legislation on referendums – the Political Parties, Elections and Referendums Act (PPERA) 2000 – is both incomplete and in some respects out of date. As explained in a previous post, a new referendum would require fresh legislation. This therefore needs to fill in the gaps and update the rules to reflect the realities of modern campaigning. The natural starting point would be the legislation that paved the way for the 2016 referendum – the European Union Referendum Act 2015. But even that has deficiencies. This post examines key points that new referendum legislation would need to address. It also considers non-legislative changes that could improve the referendum campaign.

The franchise: who should be able to vote in a further referendum?

There are good arguments for extending the franchise, and precedent for doing so: 16- and 17-year-olds and EU citizens resident in Scotland could vote in the 2014 Scottish independence referendum. But – despite attempts to change this in parliament – the 2016 EU referendum legislation did not extend the right to vote to these groups, and consistency matters. If it appeared that the result of the 2016 referendum had been overturned because the franchise had been changed, many Leave supporters would view this outcome as illegitimate. As such, the franchise for any further referendum should be the same as for the 2016 vote.

The referendum regulations in PPERA have not been substantively amended since they were introduced 2000. Since then, five referendums have been held, and the nature of communication and campaigning has changed significantly.

Successive reports from the Electoral Commission, the House of Commons Public Administration and Constitutional Affairs Committee (PACAC), and, most recently, the Independent Commission on Referendums (2018) have identified improvements to referendum regulation that should be made to enhance the fairness and transparency of campaigns. These should, if possible, be applied to a further referendum on Brexit.

However, given that such a referendum would likely be conducted on a short timescale, there would be little time for developing policy or perfecting legislation. And some proposals may be too contentious to be applied in the current context. The table below outlines proposed changes, rating them green, amber or red on how easily they could be applied. 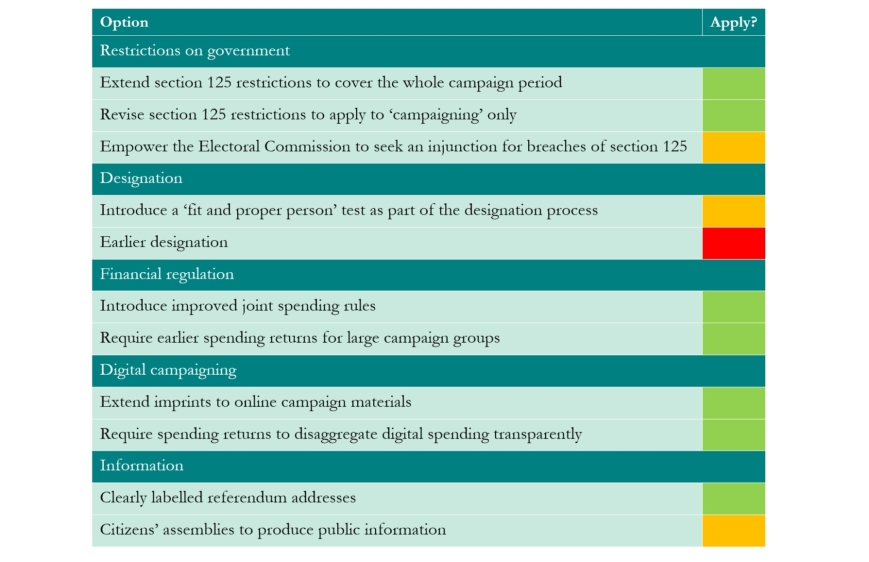 Less than three months before the 2016 referendum, the government spent £9.3 million producing and distributing a leaflet advocating for remaining in the EU, drawing strong criticism. Section 125 of PPERA prohibits the government from publishing anything relating to a referendum or its subject matter, but only in the final 28 days of the campaign, whereas the official campaign period lasts for 10 weeks. All major inquiries into UK referendums have recommended that the ban on government publications be extended to cover the whole regulated period.

Ministers have argued that such blanket restrictions could inhibit the normal working of government. A solution recommended by the Electoral Commission and Independent Commission on Referendums would be to apply a modified version of section 125 that restricts only activity that could be considered ‘campaigning’.

Although the government might resist attempts to place additional restrictions on its activities, these two proposals would likely find support on all sides of the referendum debate; including them in the legislation would therefore be advisable to ensure a smooth passage through parliament.

At present, there is no mechanism for enforcing this part of PPERA. A further proposal would be to empower the Electoral Commission to seek an injunction for breaches of section 125. But, under the pressure of time, this might be politically unfeasible. Government would likely be widely criticised anyway if it broke the rules, so introducing legal sanctions may be a low priority.

PPERA states that the Electoral Commission must designate a lead campaign group for each option in a referendum, but it cannot designate a lead on one side without doing so for the other. Both the Scottish independence and EU referendums deviated from this rule, allowing designation on just one side if no suitable group applied on the other side. These provisions should be replicated for any further Brexit referendum.

The Independent Commission on Referendums also recommended that designation should take place as soon as possible after referendum legislation is passed, and that key individuals associated with groups applying for lead campaigner status should be subject to a ‘fit and proper person’ test.

Given the short timescale envisaged for a further Brexit referendum, early designation is likely to be impossible in this case. The second proposal would be controversial, as any such test would presumably take into account compliance with electoral law at previous referendums. Attempting to introduce such a requirement in the heated atmosphere of another Brexit referendum may be unwise.

Joint spending rules aim to prevent campaign groups from circumventing spending limits by working with other groups. They are not part of the PPERA framework, but have been applied in every referendum since 2011.

At a minimum, the same requirements as in 2016 should be reapplied. However, those rules have been criticised as unclear: an Electoral Commission survey suggests that most campaigners in the 2016 referendum ‘found the joint spending rules difficult to understand’, and a recent court case concluded that the Commission had itself misinterpreted these rules. Therefore, there is a strong argument that they should be clarified before being reapplied.

Another issue is that large campaign groups have six months to submit audited accounts, meaning Electoral Commission investigations cannot begin until well after a referendum is over. The Independent Commission on Referendums recommended that the time limit could be reduced to three months with little disruption or inconvenience

Concerns about digital campaigning in elections and referendums have been widespread in the last two years, particularly in relation to potential foreign interference, ‘microtargeting’ and ‘dark ads’, and inappropriate or illegal use of personal data. These are important matters that require further investigation to develop long-term solutions. Nonetheless, a number of measures could be introduced in time for a further referendum on Brexit.

First, imprint rules, which require printed campaign materials to include details of their publisher and promoter, should be extended to online materials. The government is currently consulting on this, and it is likely that such a modification could be applied with little resistance. This requirement was previously applied in the 2014 Scottish independence referendum, so legislative text already exists.

Second, current rules for spending returns require little transparency of online spending. The Electoral Commission and the Independent Commission on Referendums have recommended that campaigns be required to provide more information in spending returns to ensure clarity over how much has been spent in what ways on digital campaigning. A second referendum would present an opportunity to trial new categories.

Designated lead campaigners are entitled to free postage on one referendum address, sent to all households or voters. Mailings on both sides during the 2016 referendum were criticised for being designed to look like official government communications. Future communications should be required to state clearly: ‘This is a communication from the X campaign’.

Below we discuss ideas for how the quality of information might be improved, beyond the legislation.

Campaign regulation for a multi-option referendum

Previous posts in this series have raised the possibility that a further Brexit referendum could give voters a choice among three options. Under PPERA, a designated campaign group for each of the three options would be entitled to the same public benefits, including public funding and campaign broadcasts. Broadcasters would need to ensure ‘due impartiality’ among all three.

But there is no viable alternative. If, for instance, the two ‘Leave’ options were subject to lower spending limits to improve parity with ‘Remain’, the former would have clear cause to complain over unfair disadvantage. The fairest option is an even distribution.

So far, we have focused on the content of legislation authorising a referendum; but there are other lessons to be learnt from past referendums.

To deal with concerns over the transparency of online advertising that we noted above, Facebook and other large internet companies have begun developing searchable repositories of online political advertising, for instance for the 2018 US mid-term elections. This should be encouraged. In the long term, a single, regulated repository should be created to maximise transparency and democratic control, but there would not be time for this before another Brexit vote.

A second major area of recent concern relates to the information available to voters. In the event of a further referendum, it would be for broadcasters, fact-checkers, experts, and others to consider how they could most effectively develop reliable information tools that would engage as many voters as possible. Possible approaches include better use of fact-checking by broadcasters, development of high-quality, impartial resources for use by the public and the media, or piloting citizens’ assemblies to foster debate and deliberation. These may be difficult in the timescale, so contingency planning should start early.

It is clear that, compared with past practice, how referendums are run in the UK could be improved. Not all the desirable changes would be feasible within the tight timeframe of a further Brexit referendum. But significant rule changes could and should be incorporated in the legislation, to ensure a level playing field, enhance transparency, and avoid a repeat of some of the issues that arose in 2016, such as concerns over digital campaigning and the accuracy of information. There would be a duty not only on government and parliament, but also on internet companies, broadcasters, researchers, and others to improve the approach they take.

This is the sixth in a series of posts on ‘The Mechanics of a Further Referendum on Brexit’. Further blogs on this topic will be added in the coming weeks: to see all posts in the series, visit our project page.

Jess Sargeant is a Research Assistant at the Constitution Unit.

Alan Renwick is Deputy Director of the Constitution Unit.

Meg Russell is Director of the Constitution Unit.

One thought on “What would be the rules for a second Brexit referendum?”