This week two developments have revived controversies about the size of the House of Lords. On Tuesday peers debated the report of the Lord Speaker’s Committee on the Size of the House, indicating strong support for its proposals. But there were also rumours that Theresa May will appoint new peers in the New Year. Meg Russell reflects on these developments and how they can, and should, fit together.

The growing size of the House of Lords, and particularly the volume of prime ministerial appointments, has been highly controversial in recent years – as set out in a Constitution Unit report in 2015, and frequently highlighted on this blog (e.g. here). This time last year the chamber took matters into its own hands, agreeing a motion that ‘this House believes that its size should be reduced’, which was rapidly followed by the announcement of a new Lord Speaker’s Committee on the Size of the House, chaired by Crossbencher Lord Burns. The Burns report was published in October, and was debated in the Lords on Tuesday. 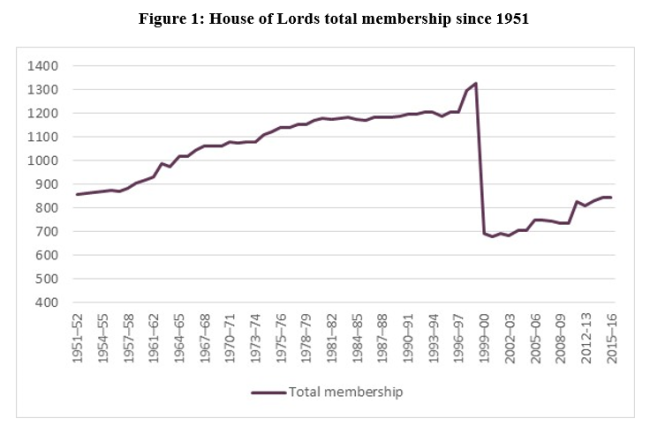 Source: Report of the Lord Speaker’s Committee on the Size of the House, Figure 1

The core proposals in the report (previously summarised on this blog by Sir David Beamish) are to bring the size of the chamber down to a ‘steady state’ of no more than 600 members, appointed for fixed 15 year terms. Appointments would continue to be made by the party leaders, but would respect a proportionality formula based on previous general election results. In the steady state the number of appointments would match retirements, but until then a ‘two out one in’ principle would apply. The report estimated that the target of 600 members would be achieved in around 11 years. All of this would be achieved by negotiation, backed up by changes to House of Lords rules and procedures, without the need for legislation.

During a debate with a whopping 94 contributors (in two parts, here and here), the great majority of speakers – over 80% – welcomed the committee’s proposals. These were variously described as ‘elegant’ (Lord Newby, LD, column 1972), ‘wise and ingenious’ (Lord Harries of Pentregarth, Crossbench, col. 1984), and ‘a masterpiece of skill, wisdom and tact’ (Lord Phillips of Worth Matravers, Crossbench, col. 2032). As already demonstrated by the debate a year ago, there is overwhelming agreement in the Lords that something must be done about the chamber’s size, for various reasons, and most peers clearly feel that Lord Burns and his committee have got the solutions largely right. In the words of the Leader of the House, Baroness Evans of Bowes Park, there ‘is a widespread concern among noble Lords at the size of the House and what has been perceived as a never-ending increase in numbers, with attendant fears over the reputation and effectiveness of this House’ (col. 1970). Put more bluntly, former Commons Speaker Baroness Boothroyd suggested that the chamber’s ‘inflated size fosters our laughing-stock image’ (col. 1982) – as also previously demonstrated on this blog. Hence there is a real need to act. 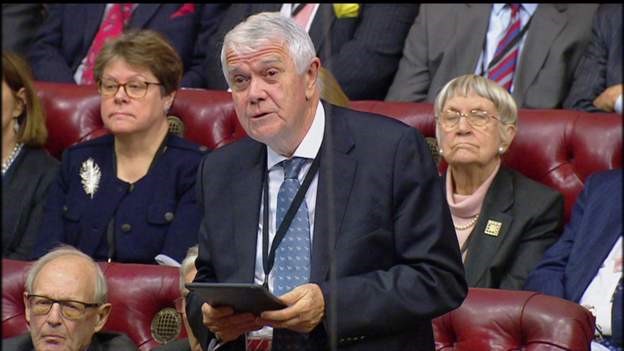 Lord Burns speaking in Tuesday’s debate. This image is subject to parliamentary copyright.

Despite widespread enthusiasm, some members did raise concerns – largely that the proposals did not go far enough. However, as acknowledged in the Burns report itself, and by most speakers, other key matters can be taken forward separately and independently of action on the report. The Burns committee’s avoidance of legislative remedies resulted from the known difficulties of passing any kind of bill on Lords reform. Key matters that would require legislation include the possibility of reducing the number of bishops, or ending the by-elections for the 92 remaining hereditary peers, both of which many members would like to see progressed. The second of these has been attempted repeatedly through private peers’ bills (with the most recent example sponsored by Lord Grocott), which have been blocked through procedural tactics by a small number of members. The Burns committee was determined that its proposals should avoid a similar fate, and so it focussed both on the most essential elements and what can be managed without a bill. As Baroness Evans reiterated in her comments, ‘the government have been clear that comprehensive reform of this House which requires legislation is not a priority for the current parliament’. Like various other members, she congratulated the committee for ‘having learned the lessons of history’ in focusing on the necessary next steps rather than a large-scale package (col. 1969-70). For example Labour’s Lord Blunkett welcomed the report’s ‘gradualism’, suggesting that ‘even the most tentative step forward in the right direction has to be applauded’ (col. 2012). Commenting on the aspirations of larger-scale reformers he continued, ‘if you’re faced with the tortoise and the hare and you know that someone in the undergrowth is going to shoot the hare, you are best off backing the tortoise’ (col. 2013). Likewise Lord Dubs (Labour) commented that ‘many of us, in the fullness of time, would like reforms to go further, but for the moment it is as good as we can get: for heaven’s sake let us get on with it’ (col. 2018).

These concerns were hence not so much criticisms of the Burns report, but suggestions of what might usefully follow. A small number of members, however, raised anxieties about the constitutional propriety of what was being proposed. These objections included claims that important changes to the second chamber ought to be given legislative backing, and that the Lords alone should not make such decisions, but instead ‘the electorate, the House of Commons or the elected government’ (Lord Oxburgh, Crossbench, col. 2092). Former Conservative Leader of the House Lord Strathclyde, in a separate point, argued that the report ‘strikes at the very heart of constitutional powers’, as it would remove the power of a Prime Minister to ‘pack’ the House of Lords, or at least threaten to do so, in the face of extreme conflict between the chambers (col. 2000).

These are interesting points, but readily rebutted by what the Burns report is seeking to do, or rather how it is seeking to do it. The fact that its proposals will not be set down in statute means that they will by necessity remain flexible to future change. Should the reforms prove not to work, or to have unintended consequences, an immediate reversal would always be possible. At any point, the government retains the ability to introduce a bill to implement an alternative solution. If for some reason (such as Brexit) the Lords became over-assertive against the government, the absence of statutory backing would in principle leave the Prime Minister, as now, free to appoint unlimited peers. The constraints on the use of such power would remain the pressure of public opinion, and the risk of further inflaming the Lords.

In this respect the strength of the Burns committee proposals can also be seen as their weakness – they are delicately balanced, and ultimately rest on political agreement. As was commented repeatedly in the debate, and in the report itself, the proposals ‘cannot go anywhere’ without in-principle agreement by the Prime Minister to limit appointments in the way proposed (Lord Burns, col. 2108). And in the absence of legislation, any such agreement is voluntary, and will bind her successors only politically and morally, not legally. If the Prime Minister indicates agreement to the constraints in the report this will trigger, in turn, agreement by peers to retire in larger numbers so that the ‘two out one in’ mechanism can begin to operate. This makes, as Shadow Leader Baroness Smith of Basildon put it, prime ministerial agreement the ‘one insurmountable issue’ (col. 2104). In urging Baroness Evans to convince Theresa May of the merits of the proposals, former Conservative cabinet minister Lord Forsyth of Drumlean hence suggested that she should feel ‘the hand of history is upon [her] shoulder’ (col. 1997). If she doesn’t act the Lords won’t act, but if she does, they will.

Peers’ welcome of the proposals is hence the first essential step, so what can we expect to happen next? One potential obstacle is the suggestion in last week’s Times (£) that a group of new peers will be appointed by the Prime Minister in the New Year, which was frequently commented upon – with varying degrees of disapproval and alarm – during the debate. Should this prove true, former Liberal leader Lord Steel of Aikwood suggested, it would ‘drive a coach and horses through the committee’s recommendations’ (col. 1995). The response from others was more sanguine. In truth this is probably, once again, a question of numbers. As several peers pointed out, Theresa May has thus far been very restrained in her peerage appointments. During 2017, 28 members either died or retired (excluding bishops), and only nine were introduced. Even within the Burns formula there is some space for further growth, though the party balance of any new appointments is key. Should the Prime Minister announce limited new peers in line with the committee’s proposals, while perhaps in parallel indicating an intention to abide by those proposals, this could set in train cross-party talks in the New Year regarding implementation of the retirement proposals, and almost certainly procedural changes to put those into effect. A fresh, though fragile, convention for peerage appointments would have been created – which if it worked, could well endure. May would become the Prime Minister who broke the impasse on Lords reform and set in train historic changes. On the other hand, should the New Year bring an announcement of excessive, or overly Conservative-dominated appointments, she could bring this whole delicate edifice tumbling down. She would also spark the fury of peers just as her EU Withdrawal Bill is due to reach them for scrutiny – which would seem unwise.

The 2017 Conservative manifesto promised ‘to ensure the work of the House of Lords remains relevant and effective by addressing issues such as its size’ (p. 43). In line with this, Baroness Evans welcomed the Burns report as a ‘serious piece of work’ which ‘the Prime Minister will consider carefully’ (col. 1969-70). If these proposals were to die, it would probably be at least a decade, perhaps much more, before there are viable Lords reform proposals around which the parties can agree. Hence we are at a crucial turning point, between reform and no reform. As Liberal Democrat Leader Lord Newby put it in Tuesday’s debate, ‘the ball is in the government’s court and the clock is ticking’ (col. 1974).

Professor Meg Russell is the Director of the Constitution Unit and was an adviser to the Lord Speaker’s Committee on the Size of the House of Lords. This post is written in a personal capacity. Thanks to Hannah Dowling and Ruxandra Serban for background research.

One thought on “The size of the House of Lords: what next?”