There is a perception that Westminster politics is a self-serving career machine for the ambitions of a small cadre of self-reproducing politicians. To what extent is this view justified on the basis of the evidence? With six months until the 2015 general election Rosie Campbell, Chrysa Lamprinakou and Jennifer vanHeerde-Hudson assess the diversity of the parliamentary candidates selected so far.

There can be no silencing of discussions about who governs us in the wake of the Scottish referendum. As the Westminster parties try to identify means to simultaneously fix both the Scottish and English questions, whilst maximising their electoral advantage, the electorate remains sceptical about mainstream politicians’ commitment to truly represent them. We see evidence of this scepticism in the declining turnout rates at British general elections, the rise in support for UKIP and in the 1,617,989 Scots who decided that they would prefer not to be governed from Westminster at all.

The three party leaders, who travelled up to Scotland to deliver their promise of greater devolution, may not share policy preferences, but on the surface at least they have a great deal in common. All three are white, youngish-middle-aged men with high levels of education and all are career politicians.   The seeming homogeneity of the political elite feeds into a perception that Westminster politics is a self-serving career machine for the ambitions of a small cadre of self-reproducing politicians. To what extent is this view justified on the basis of the evidence? Are political parties continuing to select individuals who fit the usual mould to stand for parliament or is there evidence of increasing diversity among parliamentary candidates?

Using data from our study of parliamentary candidates (see parliamentarycandidates.org), we look at the gender, race, age and occupation of the candidates selected by party and seat winnability so far.

The Labour Party’s continued use of all women shortlists has become very topical once again. Veteran MP Austin Mitchell used the occasion of the announcement of his retirement to complain that the influx of women MPs had ‘weakened parliament’. Mitchell’s intervention was followed by a YouGov poll for The Times Redbox that showed that All Women Shortlists (AWS) remain unpopular with the electorate, although they were even more unpopular among older people and men than among women and members of younger generations. Female politicians and feminist commentators, however, have defended the use of all women shortlists to overcome bias in the parties’ selection processes.

So what is the sex balance of those seeking election to the Commons in 2015 for the seven largest parties (Conservative, Labour, Liberal Democrat, UKIP, SNP, Plaid Cymru and Green)? Of the 1440 candidates selected so far (including returning MPs) 73% are men (1045) and 27% are women (395). Excluding incumbent MPs, there are 877 candidates standing for Parliament, 70% male (613) and 30% female (264) candidates. Breaking this down by party (see Figure 1), we can see that Labour’s continued use of AWS, means a 8 percentage point advantage over the Conservatives and a 9% advantage over LibDems in terms of selecting women candidates: Conservatives 31%; Labour 39%; LibDems 30%; Green 37%; Plaid Cymru 29% and UKIP 12%.

Of the candidates (including returning MPs) selected thus far, we have identified 100 with a BME background. The Labour party has the highest number of BME candidates (43), followed by the Conservatives (29) Liberal Democrats (15), UKIP (8), the Greens (4) and Plaid Cymru (1).

Promisingly, 70 of the 100 BME candidates are not sitting MPs but new candidates and, and as shown in Table 1 below, seven have been selected to stand in retirement seats. Five Tory candidates, Ranil Jayawardena (Hampshire North East), Nusrat Ghani (Wealden), Seema Kennedy (South Ribble), Alan Mak (Havant) and Rishi Sunak (Richmond) have been selected in safe Conservative seats. Given the success of previous BME candidates in safe seats, it is likely that all three will represent their constituencies in Parliament in Westminster in 2015.

In addition to retirement seats, 16 BME candidates have been selected to stand in the 100 marginal constituencies, also indicating that parties are attempting to increase the number of their BME MPs. Whilst it remains to be seen whether further progress towards representation will be made in 2015, the selection of 70 new BME candidates this early on, as well as the choice of seats, suggests that the positive trend established in 2010 may continue.

One consequence of the professionalisation of politics has been a change in the age at which MPs begin their political and parliamentary career. Peter Riddell and Anthony King have demonstrated the shift from parliamentarians who had established careers elsewhere before entering politics, with a new generation who chose politics as a career, increasing the number of politicians first elected in their 30s and early 40s. This trend is evident in the 2015 selections.

The Labour party has selected a higher percentage of younger candidates (16%), compared to Conservative (12%) and Liberal Democrat (9%) candidates. Notably, however, of the three main parties, the Labour party also has a higher percentage of older candidates: 14% are in their 60s compared to 10% for the Liberal Democrats and just 3% for the Tories. Finally, our data show that the vast majority of the UKIP candidates, 75%, are in their 50s and 60s, with one-third of new candidates aged 60 or older.

Looking at retirement seats, the pattern holds for the Conservative and Labour selections. The majority, 53%, of Conservative candidates in seats in which the party’s sitting MP is standing down are in their 40s whilst most of Labour’s candidates in retirement seats, 44%, are drawn from the 30-39 age group. Overall, the data selected for the 2015 cohort thus far, confirm previous findings about the gradual rise of a younger British political class.

Finally, we look at the previous occupation of 2015 candidates by party and specifically those candidates with ‘instrumental’ occupational backgrounds. Instrumental occupations are those that have a clear link to politics—e.g. local councillor, special advisor, party worker or union leader—and are used as ‘a means to an elected end’ (Cairney 2007).

As shown in the figure below, roughly a third of Conservative and UKIP candidates hold instrumental jobs at the time of standing for Parliament. Historically, candidates from the three main parties came to politics from established professions (e.g. solicitors/lawyers, medicine, university lecturers, etc.) or from business/industry, however, as politics has become more professionalised, the number of candidates from instrumental backgrounds has grown. This is increasingly true for Labour and the minor parties. 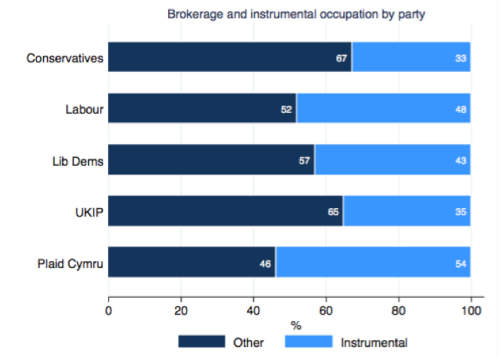 So, are the 2015 candidates really new in terms of what has come before? Is there evidence of a new political class? We draw three conclusions based on candidates selected to date. First, there is some evidence that parties are choosing a more representative set of candidates, at least in terms of sex and ethnicity. Second, candidates are slightly younger on average, but there is variation across the parties in terms of average age. And finally, there are an increasing number of candidates for whom politics is their first job, confirming evidence elsewhere showing a narrowing of the political class. One consequence of this is that it may serve to reinforce the view among many in the public that Britain’s politicians are ‘out of touch’.

There are some changes, but its early days. With six months until the 2015 general election, we’ll be keeping watch over who’s selected and elected.

Data are correct as of 26 October 2014. The parliamentarycandidates.org project is funded by the Leverhulme Trust (RPG-2013-175)

Dr Rosie Campbell is Reader in Politics at Birkbeck