The 2019 general election saw more women run for (and win) seats in the House of Commons than ever before. However the level of abuse those women received was also higher than ever, and affected them disproportionately compared with men. Sofia Collignon explains what we can learn from the data about the experience of female candidates.

After parliament voted in November 2019 to trigger an election – which took place in December – a record number of women presented themselves for office, as 37% of candidates were female. This is an improvement of eight percentage points over the number of women standing just two years earlier, in 2017 (29%). Perhaps more relevant is that a record number of female candidates actually went on to become MPs (220), comprising 34% of the total number of members of the House of Commons (+5%) and making up a majority of both Labour and Liberal Democrat MPs. The increase in the number of women standing for office and winning a seat is undeniable progress for the representation of women in the UK. But this positive scenario becomes more pessimistic if the violence experienced by women in politics is considered.

Drawing on data from the Representative Audit of Britain (RAB) survey of 2019 candidates, this blog post summarises the degree to which women and men candidates suffered harassment and intimidation while campaigning for the 2019 general election in the UK and the nature of the abuse they experienced. It shows that women are distinctly affected by abuse, harassment and intimidation in two ways: the frequency of the abuse and the motivation behind it.

The frequency of abuse

The analysis of RAB 2019 responses indicates that 49% of candidates reported that they suffered some form of abuse, harassment or intimidation while campaigning. This is an increase of 11 percentage points compared with 2017. The proportion is significantly higher for women (61%) than men (44%). It is particularly worrying to notice that, despite multiple initiatives, the findings of a 2017 inquiry by the Committee on Standards in Public Life (CSPL) and frequent media coverage, harassment against women increased by 16 percentage points, almost twice the increase observed among men (see Figure 1). Not only were more women standing for office, but they were also reporting more acts of intimidation, threats, physical and psychological violence.

The type of abuse

Looking at the types of abuse suffered by candidates, the most common type takes place online (Figure 2). We found evidence that women are being targeted on social media and over email. 54% of women candidates (20 percentage points more than 2017) and 39% of men received improper communications on Twitter, Facebook or other social media sites (13% more than in 2017). In addition, 42% of women and 32% of men received abusive emails. While the volume of emails of this nature increased for candidates in general (12% compared with 2017), the data shows that the rate at which it is increasing is, again, faster for women (16% increase, compared with a 12% increase among men). The spread of misinformation disproportionately targets women as 32% of women and 23% of men reported the spread of misleading information about them personally during the 2019 election campaign.

Physical abuse was also on the rise. Online harassment and intimidation was followed in terms of frequency by unwanted approaches (e.g. at home, at work, in public places) by members of the public. Again, there is evidence that women are being disproportionately affected: 32% and 20% of men were approached at their home, place or work or public places. Women are also significantly more likely to be threatened, followed, receive abusive letters and phone calls, and to be sexually assaulted than men.

These patterns indicate that women participating in politics in the UK are more likely to suffer from online, physical and psychological violence than men. Women competing for a seat in parliament are being forced to think more about the personal risks of doing so and therefore face a greater incentive to adapt their behaviour as a consequence.

Figure 2 Types and patterns of abuse during the 2019 GE 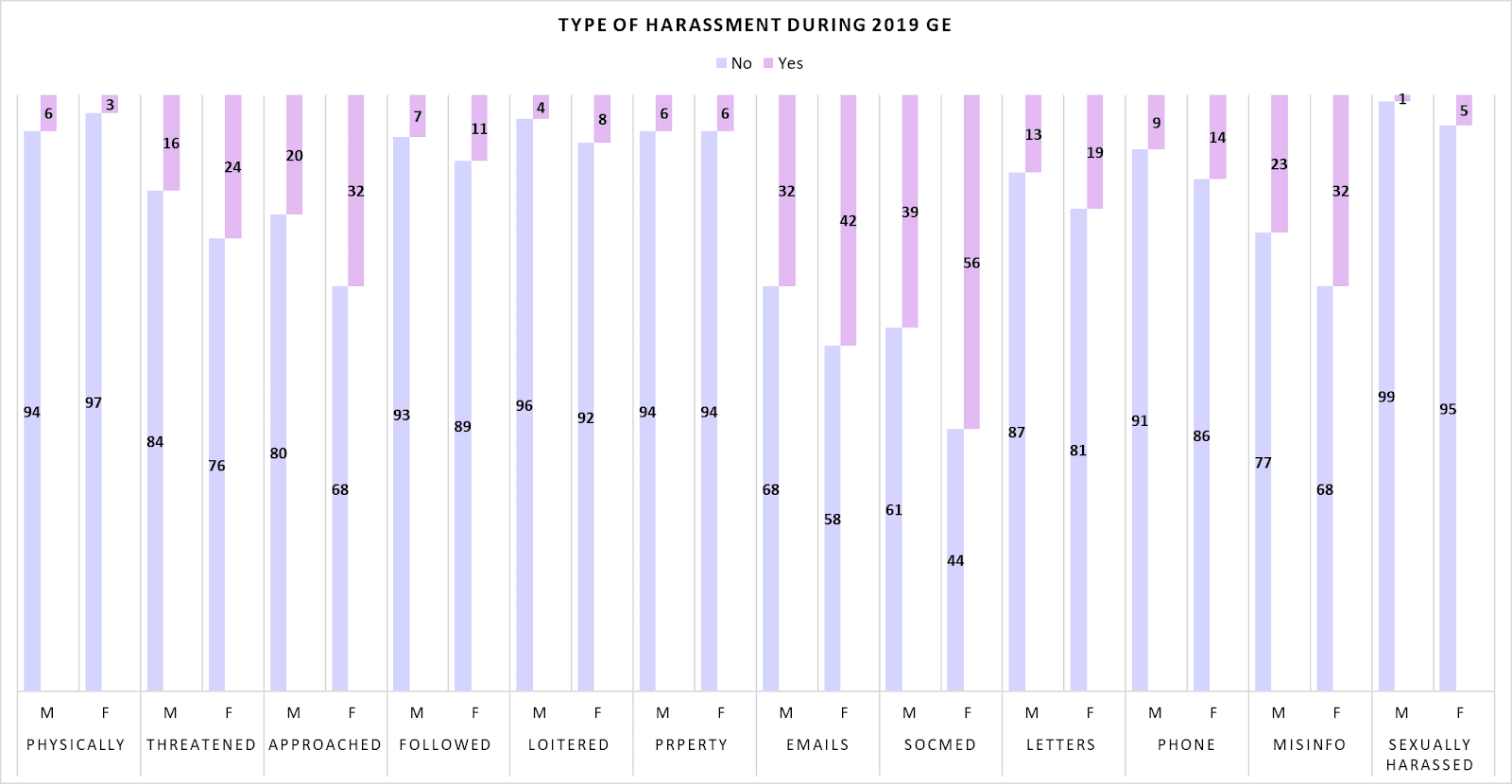 The motivation behind the abuse

Who is behind the abuse? Women candidates are more likely to be abused by individuals with mental health problems (51% of women and 41% of men), by angry members of the public (84% of women and 69% of men) and by supporters of other parties (85% of women and 66% of men). This latter statistic provides further support for the claim that the abuse suffered by women candidates is often politically motivated, and often aims to prevent them from reaching office by means of intimidation.

Women reported feeling significantly less safe than men while campaigning. One in every two candidates experienced some fear while campaigning but this proportion is higher for women, as about three in every four women felt this way. There is a strong correlation between fear and the type of perpetrator behind the abuse. The data shows that men and women react similarly when the abuse is committed by angry members of the public. However, women are significantly more afraid when the abuse is committed by supporters of other parties or candidates. The fear that women feel while campaigning puts additional strains on them and exacts an additional emotional cost that women need to overcome if they want to participate in politics. Parties and candidates alike should encourage their voters and supporters to minimise the abuse of opponents in order to improve the quality of the democratic process and to avoid affecting the diversity of the candidate pool.

In conclusion, an increasing share of candidates in the UK are targets of harassment, intimidation and abuse during electoral campaigns and perpetrators seem to be more likely to choose female targets. Women have always been underrepresented in politics, both demographically and substantially. Seeing more women willing to participate is a good signal that this is changing, but the increase in the abuse they suffer is a manifestation of the cultural resistance they face to express their political ambition and reach positions of power. Put together, the frequency and type of abuse, the reasons behind it, and the strong feelings of fear while campaigning, indicate that women candidates are disproportionately affected by intolerance. They pay a heavy cost for expressing their political views and ambition. This targeting of female candidates may put at risk decades of work aimed at motivating women to stand for public office.

To mark the 25th anniversary of the Constitution Unit we have launched a special fundraising initiative, encouraging supporters to make donations incorporating the figures 2 and 5. If you value our work, and would like to contribute to its future continuation, please consider making a one-off or regular donation. Contributions are essential to supporting our public-facing work. Find out more on our donations page.

Sign up to our mailing lists for news of events and publications, or to our blog, here.

Dr Sofia Collignon is Lecturer in Political Communication at Royal Holloway University of London and Co-Investigator in the ESCR-funded Representative Audit of Britain project, part of Parliamentary Candidates UK.

One thought on “The 2019 election campaign shows that abuse, harassment and intimidation of candidates is getting worse, especially for women”