The latest issue of Monitor, the Constitution Unit’s regular newsletter, was published today. The issue covers all of the major UK constitutional developments over the past four months, a period that has seen the EU (Withdrawal) Bill pass into law, a government White Paper on Brexit provoke numerous ministerial resignations, continuing investigations into the conduct of the EU referendum campaigns, and a failure to restore devolved government in Northern Ireland. Abroad, Ireland’s referendum on repeal of restrictions on abortion passed by an overwhelming majority, and Italy has a new government, the formation of which raised questions about the position and role of the country’s president. This post is the opening article from Monitor 69, and you can download the full issue on our website.

Political debate in the UK continues to be dominated by the fallout of the 2016 Brexit referendum. Both government and parliament are grappling with the detail of how Brexit can, and should, be realised. 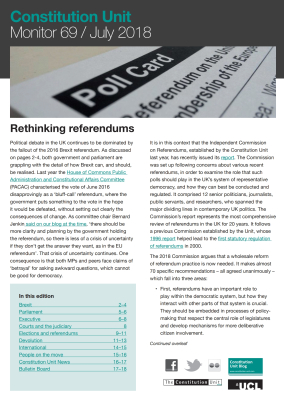 Last year the House of Commons Public Administration and Constitutional Affairs Committee (PACAC) characterised the vote of June 2016 disapprovingly as a ‘bluff-call’ referendum, where the government puts something to the vote in the hope it would be defeated, without setting out clearly the consequences of change. As committee chair Bernard Jenkin said on our blog at the time, ‘there should be more clarity and planning by the government holding the referendum, so there is less of a crisis of uncertainty if they don’t get the answer they want, as in the EU referendum’. That crisis of uncertainty continues. One consequence is that both MPs and peers face claims of ‘betrayal’ for asking awkward questions, which cannot be good for democracy.

It is in this context that the Independent Commission on Referendums, established by the Constitution Unit last year, has recently issued its report. The Commission was set up following concerns about various recent referendums, in order to examine the role that such polls should play in the UK’s system of representative democracy, and how they can best be conducted and regulated. It comprised 12 senior politicians, journalists, public servants, and researchers, who spanned the major dividing lines in contemporary UK politics. The Commission’s report represents the most comprehensive review of referendums in the UK for 20 years. It follows a previous Commission established by the Unit, whose 1996 report helped lead to the first statutory regulation of referendums in 2000.

The 2018 Commission argues that a wholesale reform of referendum practice is now needed. It makes almost 70 specific recommendations – all agreed unanimously – which fall into three areas:

The Commission argues that changes in the laws regulating referendums should happen now: this should not wait until the next referendum is called. It also calls for a culture change in how referendums are thought of. They should not be ‘quick fixes’ used by politicians to resolve a political problem. Nor should campaigners call for a referendum without carefully considering the consequences. Referendums can strengthen democracy, but also weaken it, by polarising debate and hindering careful, reasoned discussion of complex issues. While they are needed on some issues – particularly relating to sovereignty – they should be used with caution.

In considering these matters, the Commission drew on considerable evidence from both the UK and abroad, and more such evidence is emerging all the time. Notably, Ireland’s recent referendum on abortion, like its earlier referendum on same-sex marriage, demonstrated the value of using a citizens’ assembly prior to a referendum to open up informed and thoughtful discussion of a divisive policy issue. The Commission commended such examples, and called for greater use of such processes in the UK. Very recently, two House of Commons committees established the Citizens’ Assembly on Social Care – the first ever official citizens’ assembly in the UK – to inform their investigation into the funding of adult social care. This built closely on the model developed by last year’s Citizens’ Assembly on Brexit, run by the Constitution Unit; it appears to have been a resounding success.

The most recent Irish referendum also saw important developments in the debate about online political advertising. Just before Monitor went to press, the Electoral Commission reported on ways to improve the regulation of digital campaigning, and several parliamentary and other inquiries are investigating related concerns. The Independent Commission on Referendums therefore reports at a time of lively debate on these issues.

Meanwhile, the months ahead may well be marked by calls for future referendums. The Irish change sparked some demands for a referendum on abortion in Northern Ireland. The larger question concerns the ‘People’s Vote’ campaign, which demands a referendum on the final Brexit deal, and whose demonstration in June attracted widespread headlines. The Independent Commission on Referendums deliberately did not take a view on whether there should be a further referendum on Brexit.