The Cabinet Office this week published the official Areas of Research Interest for six government departments, including the Department for Transport and the Foreign and Commonwealth Office. Tom Sasse, of the Institute for Government, welcomes the decision to publish, but claims that the quality of the output varies between departments. At a time when ministers have less money to spend on research, he argues that the government does not work well enough with academia and needs to change its approach if proper evidence-based policy making is to occur in the future.

Policy makers need to find the research and evidence they need to strengthen policy, and researchers need to identify the Government’s priorities so that they can provide input.

The 2015 Nurse Review of Research Councils called on the government to publish the priority questions it would like answered through new or existing research. Sir Jeremy Heywood, the Cabinet Secretary, announced the first publication of the Cabinet Office’s Areas of Research Interest (ARI) last week.

These first six ARIs are mostly brief, high-level and of mixed quality. The Department for Transport’s ARI, however, stands out as an example for others to follow.

These ARIs are welcome, but government departments need to develop more comprehensive strategies for accessing the evidence and research they need.

Although overall research and development spending across departments has grown since 2008, this rise has been concentrated almost entirely in three big spending departments: Business, Energy and Industrial Strategy; Health; and International Development. 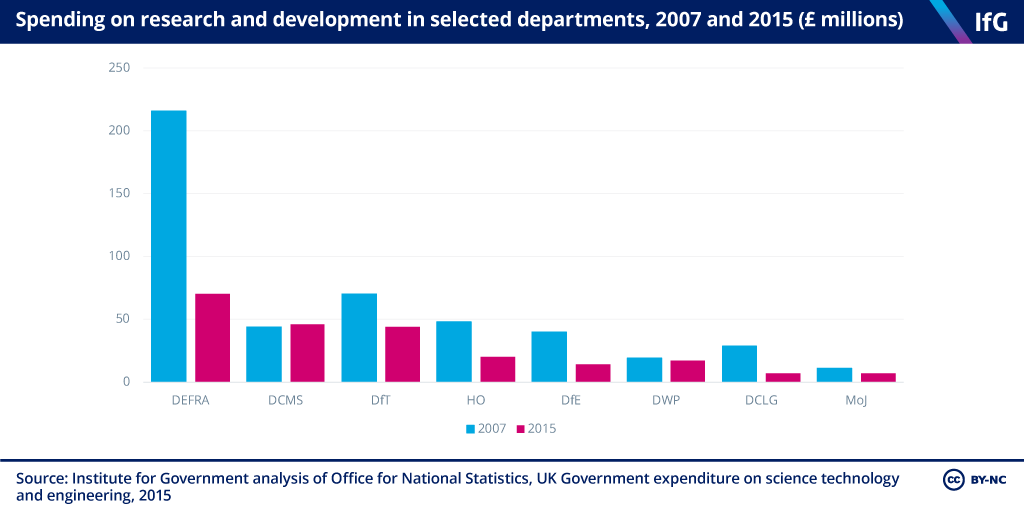 On average, staff numbers fell by 20% across departments between 2010 and 2016. Departments have told the Institute for Government that these cuts disproportionately affected research capacity, which is seen as less important than frontline policy roles. Sadly, staff data is not granular enough to explore this further.

Departments with greatly reduced capacity to commission or conduct research have to find the knowledge and evidence they need in other ways.

The ARIs can be part of this, but given the typically lengthy timescales for funding and conducting academic research they will not help the civil service meet shorter-term challenges, like many of the questions raised by Brexit.

Nor will they solve the deeper challenge of creating much stronger relationships with academia. Government departments and the Policy Profession (an informal network for civil servants who work in, or are involved with, the formation of policy) should focus on the skills policy makers need to be able to understand and navigate academia in terms of disciplines, content, working patterns and motivations. The Research Excellence Framework, which rewards academics for impact, offers a huge potential resource for policy makers if they understand how to make better use of it. Policy makers also need to get better at judging the quality and strength of academic evidence – and being more consistent in how they use it.

Government departments should also address their internal culture. Institute for Government research found that policy makers are rarely encouraged to look for new evidence or feel they do not have the time to do so.

Civil servants often harbour negative perceptions of academics as being too slow, too time-consuming to deal with and not relevant enough to properly engage with. This is sometimes true, but not always.

The Nurse Review concluded three years ago that departments lacked a ‘strategic approach’ to research. They still do. The development of ARIs is a first step towards fixing this, but there is much more to be done.

This post originally appeared on the blog of the Institute for Government on 12 January and is reposted with permission.

Tom Sasse is a Researcher at the Institute for Government and is currently working on The History of Whitehall project.