Why are there now more than 100 freedom of information laws around the world, even though they help opponents and hinder governments? In a new book, published this month by Manchester University Press, Ben Worthy investigates. He concludes that the main reason is that as a symbolic pledge in opposition FOI laws are hard to resist. Once in power these promises are hard to back down from, though experience suggests that proposed laws are often watered down before being enacted. These findings are summarised here. 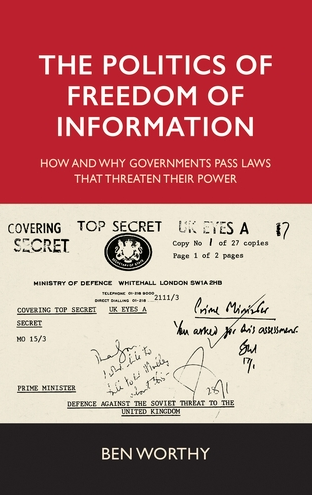 Why don’t more politicians react to freedom of information (FOI) like Lyndon Johnson? Why don’t more of them run a mile when presented with the possibility of giving the public a legal right to ask for information from the government? When the idea of an FOI law was suggested to Johnson in 1966 by a fellow Democrat Congressman the US President responded, after some swearing, ‘I thought you were on my side?’ As his Press Secretary explained:

LBJ… hated the very idea of the Freedom of Information Act; hated the thought of journalists rummaging in government closets and opening government files; hated them challenging the official view of reality.

For any budding politician, FOI appears to be the ultimate political boomerang. It helps your opponents. It hinders you.

To make FOI laws even less appealing, there are no votes in them. Merlyn Rees, a Home Secretary who fought hard against an FOI law in the 1970s, once exclaimed that ‘the Guardian can go on for as long as it likes about open government… but I can tell you that in my own constituency of 75,000 electors I would be hard pressed to find many who would be interested’. Only in India, where the Right to information Act was part of an anti-corruption campaign, have FOI laws responded to broad public enthusiasm. So how is it that there are now more than 100 FOI laws around the world?

The question is really why would a politician support FOI in the first place? Sometimes they believe in openness and sometimes leaders who don’t believe in it have it forced upon them, as Theresa May has discovered over Brexit. Other times it is for pure advantage, because a scandal makes it hard to avoid (as in Ireland), so a politician can ensure that they get information in the future or because it has promised FOI as part of a coalition deal (as in India). It is also about context. Often FOI laws are pushed through when there is lots of other constitutional or legal change going on. Across the world, as Rick Snell points out, organised groups and enthusiastic individuals, often ‘outsiders’, push for an FOI law when other key people are distracted or looking the other way.

There is also the symbolism. Promising an FOI law sends out all sorts of positive messages of radicalism, change and empowerment that new governments find difficult to resist. This is especially the case for an opposition politician coming into power, as with Tony Blair after the ‘sleaze’ and secrecy of John Major. Committing to a law tells voters ‘we are different’ and also offers to give ‘the people’ a new right. FOI also carries a pleasing moral angle for politicians: ‘you can look inside as we’ve got nothing to hide (unlike the last lot) etc.’. All these reasons make FOI laws, at least on paper, hard to resist.

The problem for politicians is that they can overdo it. In 1996 Tony Blair gave a speech where he referred to FOI as ‘not just important in itself. It is part of bringing our politics up to date, of letting politics catch up with the aspirations of people’ and went on to say it would help involve more people in politics and increase trust in government. Blair’s words came back to haunt him, and stop him, when he wanted to water down the law.

The problem is that when the enthusiasm dims FOI is then hard to back out of. Politicians often display public support but have private regrets. Once in power there are fights behind closed doors as regretful enthusiasts and those who weren’t paying attention wake up and fight back: some laws are lost or put on hold and most are watered down. Parliaments, civil society and the media try to keep proposed laws alive. Those FOI laws that survive often emerge as a compromise between the hopes of campaigners and the fears of government.

Once FOI laws are up and running the split between supporters and opponents continues. Lyndon Johnson refused to have a photographer at the signing of the law. Tony Blair quaked at his own imbecility for championing it, devoting a medium sized rant in his autobiography to his own stupidity:

Freedom of Information. Three harmless words. I look at those words as I write them, and feel like shaking my head till it drops off my shoulders. You idiot. You naive, foolish, irresponsible nincompoop.

He went on to claim it was used only by journalists and mainly deployed as a ‘weapon’ (none of which is true). David Cameron, despite talking up Open Data, also felt FOI was a ‘buggeration factor’ and tried to reduce the strength of the law.

Yet outside of government FOI laws are popular. The laws have been used recently to find out, for example, about the hundreds of council tax arrears notices sent to councillors, ward-level Brexit voting figures and the number of patients stranded in hospitals. It has even led to the mass resignation of a parish council.

So FOI laws get here because they are hard to resist in opposition but hard to back out from in power. Even Lyndon Johnson signed the law and, as his Press Secretary pointed out, went and took all the credit for it afterwards.

Dr Ben Worthy is a Lecturer in Politics at Birkbeck College. His new book, The Politics of Freedom of Information: How and why governments pass laws that threaten their power, was published by Manchester University Press this month. You can read chapter one here and order the book here. Prior to joining Birkbeck he was a Research Associate at the Constitution Unit, working on projects on FOI.

2 thoughts on “Why pass FOI laws? The politics of freedom of information”