The latest issue of Monitor, the Constitution Unit’s regular newsletter, has been published today. The issue covers all of the major UK constitutional developments over the past four months, a period that has included the High Court and Supreme Court rulings in the Article 50 case, the unveiling of Theresa May’s Brexit plan and the election of Donald Trump as President of the United States, plus much else besides. The front page article is reproduced here. You can read the full issue at this link. 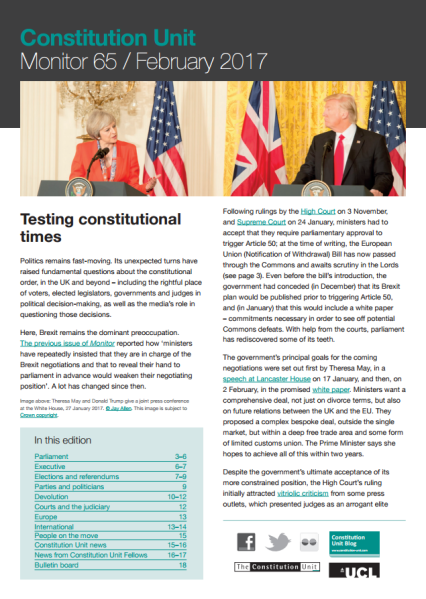 Politics remains fast-moving. Its unexpected turns have raised fundamental questions about the constitutional order, in the UK and beyond – including the rightful place of voters, elected legislators, governments and judges in political decision-making – as well as the media’s role in questioning those decisions.

Here, Brexit remains the dominant preoccupation. The previous issue of Monitor reported how ‘ministers have repeatedly insisted that they are in charge of the Brexit negotiations and that to reveal their hand to parliament in advance would weaken their negotiating position’. A lot has changed since then.

Following rulings by the High Court on 3 November, and Supreme Court on 24 January, ministers had to accept that they require parliamentary approval to trigger Article 50; at the time of writing, the European Union (Notification of Withdrawal) Bill has now passed through the Commons and awaits scrutiny in the Lords (see page 3). Even before the bill’s introduction, the government had conceded (in December) that its Brexit plan would be published prior to triggering Article 50, and (in January) that this would include a white paper – commitments necessary in order to see off potential Commons defeats. With help from the courts, parliament has rediscovered some of its teeth.

The government’s principal goals for the coming negotiations were set out first by Theresa May, in a speech at Lancaster House on 17 January, and then, on 2 February, in the promised white paper. Ministers want a comprehensive deal, not just on divorce terms, but also on future relations between the UK and the EU. They proposed a complex bespoke deal, outside the single market, but within a deep free trade area and some form of limited customs union. The Prime Minister says she hopes to achieve all of this within two years.

Despite the government’s ultimate acceptance of its more constrained position, the High Court’s ruling initially attracted vitriolic criticism from some press outlets, which presented judges as an arrogant elite seeking to trample upon the people’s view as expressed in last June’s referendum. Some, most notably former Conservative Attorney General Dominic Grieve, urged the Prime Minister and Lord Chancellor to speak up for the judges’ essential role in defending the rule of law. The latter eventually did so, though in guarded terms. The Supreme Court’s subsequent judgement was, thankfully, greeted more calmly.

The next to navigate the delicate line between respecting public sentiment and ensuring proper scrutiny of executive decisions were parliamentarians. The Article 50 Bill’s Commons second reading provided a textbook example of MPs’ representational dilemmas. Sole Conservative rebel Kenneth Clarke conjured up Burke in following his conscience, while opponents such as Labour’s Chris Bryant, representing constituencies where the majority backed Leave, faced tougher choices still. Many – on both sides – cited the national or local vote to justify their decision, while others simply stayed away. Labour faced the biggest problems, with 47 rebels at second reading, forcing another frontbench reshuffle.

In the end, the bill passed through the Commons without difficulty. Only two proposed amendments – designed to strengthen parliament’s voice towards the conclusion of the Brexit negotiations and to protect the residence rights of EU citizens’ resident in the UK up to 23 June – gained support from more than one Conservative rebel. Even in these cases the government’s majority – buoyed by six Labour rebels and support from the DUP – was over 30. The final third reading vote backed triggering Article 50 by a majority of four to one. The Lords is very unlikely to vote against the bill in its entirety, but might still push for some amendments.

The Brexit challenges remain myriad. As discussed on page 12, the Supreme Court determined that there is no justiciable requirement to consult the devolved institutions, but the territorial situation is very delicate (see pages 10–12). Parliament’s involvement will remain key, notably once attention shifts to the government’s ‘Great Repeal Bill’. Much will clearly depend on responses from other EU member states (see page 13). A report from the Constitution Unit’s Alan Renwick, published on 3 February, points to the extreme difficulties the government faces in delivering the goals it has set, and the great uncertainties that remain over what outcome will eventually emerge.

As a blog post from Alan Renwick and Meg Russell explored at the time, reaction to the High Court’s ruling was worryingly resonant of populist anti-establishment sentiment spreading in many parts of the world. Less than a week later, Donald Trump was elected President of the United States – having promised to ‘drain the swamp’ in Washington. December’s Italian referendum was more ambiguous (see page 14), though anger against political elites was a factor. Fresh elections in Austria did narrowly reject the far right’s presidential candidate. But eyes will now turn to the Netherlands in March and France in April and May.

In the US, the caustic ‘America first’ rhetoric of Trump’s January inauguration speech gave no hint that he might moderate his campaign agenda. Within a fortnight, claims of ‘constitutional crisis’ could already be heard. Trump’s anger at the liberal media quickly spread to the judges, after his order banning immigration from several majority-Muslim countries was blocked (see pages 13–14). Other concerns include his own financial interests, and his reorganisation of the National Security Council. The new President’s relationship with Congress, and whether he can successfully pit ‘the people’ against ‘the system’, remains to be seen.

Reactions in the UK to Trump’s rhetoric and agenda have been divided. The parliamentary petitions system has been used to gather nearly two million signatures opposing Theresa May’s offer to Trump of a state visit, and MPs will debate this on 20 February. After over 200 MPs signed an Early Day Motion against a Trump address to parliament and amidst threats to boycott any such visit, the Commons Speaker, in an unusual and controversial intervention, effectively vetoed the idea. Theresa May’s post-Brexit vision depends on trade deals with the US and others, and while many consider Trump toxic, he clearly also has some UK support. Attitudes to Brexit may depend partly on how these other relationships play out.

Concerns continue to grow, in the UK, US and elsewhere, about ‘post-truth’ politics, ‘fake news’ and (most recently) ‘alternative facts’. The Constitution Unit will conduct research over the coming year, funded by the McDougall Trust, aimed at identifying ways to challenge these trends (see page 13). But the rise of social media may be making that increasingly difficult.

The issue was edited by Jack Sheldon.