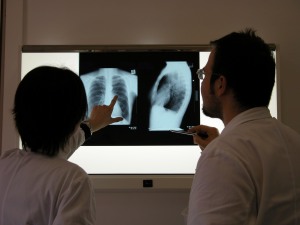 Before you ask, no, he’s not a cyborg from the future, or a genius billionaire playboy philanthropist. Although it sounds like science fiction, this is increasingly science fact for thousands of cardiac patients across America and around the world.

Hugo Campos has an Implantable Cardioverter Defibrillator (ICD) attached to his heart. He suffers from a relatively common heart condition and needs the ICD to facilitate electric therapy in the event of irregular heart activity.

The same device also streams a great deal of complex information back to its manufacturer, information that the implantee  is unable to access directly. Even though the ICD is implanted into his own chest and regularly transmits data about him out of it, Hugo has to rely solely on his doctor, who actually doesn’t have access to the complete real-time “raw data” either, instead an interpreted dataset from the manufacturer.

Personal data doesn’t get more personal than this. When Mr Campos approached the ICD’s producer and requested direct access to the information being beamed out of his own chest cavity, he was refused. (See “Top Five Excuses ICD Manufacturers Use to Justify Not Releasing Data to Patients” and also “Five Reasons Why Patients with Implantable Defibrillators Deserve Their Data”)

In response, he disabled the transmission entirely and by his own admission is now risking his health to make a political statement: “I will not be monitored remotely if I am not made part of this data loop.”

It is not clear how much and what type of data is being excluded from the manufacturer’s dataset, and consequently its ultimate usefulness is unknown. Mr Campos argues that at the very least he has the right to see it, and determine this for himself. “We get all our financial data — why is it different with health care? Patients should be empowered to take care of their lives.”

The information age has transformed our expectations. In years gone by we would trust our physicians to know best; we had little choice. Today, Hugo Campos represents a growing e-patient movement who want to break away from the total dependency inherent within the traditional doctor-patient relationship.

Of course, in order to be denied access to data, the data has to be there in the first place. Globally – nobody has precise figures – it’s fair to say that many people with high-risk hypertrophic cardiomyopathy cannot access, let alone afford an ICD, or are simply not diagnosed in time.

Nevertheless, it’s hard to shake the feeling that Mr Campos has a point.