In a new report published today, Alan Renwick and Robert Hazell examine options for the design of a constitutional convention in the UK. The report identifies and examines twelve key design features that need to be decided. These are summarised here.

Proposals for a UK constitutional convention are made by several parties in their 2017 election manifestos and have been prominent on the political agenda ever since the Scottish independence referendum in 2014. Such proposals are intended to address both widespread disillusionment with the state of democracy and deep constitutional challenges, such as those posed by Brexit and uncertainty over the future of the Union. But there has as yet been little detailed thinking about the form that a constitutional convention should take. In our new report, we seek to fill that gap. We examine the issues, explore the lessons to be learned from constitutional conventions elsewhere, and identify the pitfalls to be avoided. 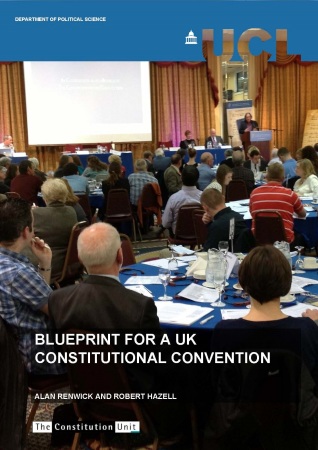 Most supporters of a constitutional convention argue that it should not be a commission of the ‘great and the good’ and nor should it be composed solely of politicians. Such approaches may have been viable in the past, but expectations for democracy have moved on and more direct forms of citizen engagement are now widely advocated. Where fundamental questions about the country’s future form and direction are at stake, the voices of members of the public should be clearly heard. This attracts many to the citizens’ assembly model of a constitutional convention.

A citizens’ assembly is a body of citizens who are selected at random from the population at large. Stratification is used to ensure that, so far as possible, the assembly’s membership reflects the diversity of the population in terms of criteria such as gender, age, and place of residence.  The assembly meets over multiple weekends. First, the members learn about the options that are available and get the chance to quiz experts and discuss initial ideas among themselves. Then they hear from advocates of a wide variety of views – from politicians, campaigners, and members of the public who wish to be heard. Finally, they reflect on all they have heard, deliberate in depth among themselves, and agree conclusions. Those conclusions are written up in a report, which is submitted to government and parliament.

Citizens’ assemblies were first held around a dozen years ago in British Columbia, Ontario, and the Netherlands. The most recent official assembly of this kind is working at present in Ireland: it agreed proposals for the liberalisation of Ireland’s highly restrictive abortion rules in April and it will shortly move on to consider a number of other issues.

There is clear evidence that such assemblies work well: the quality of members’ engagement is very high and they can develop conclusions that are reasoned and coherent.  At least in Ireland, they have also done much to encourage wider public debate and shape decision-making.

END_OF_DOCUMENT_TOKEN_TO_BE_REPLACED

In a new report published jointly by the Constitution Unit and the UCL European Institute, Alan Renwick examines what the process of Brexit is likely to look like over the coming weeks, months, and years. Here he summarises five key lessons. 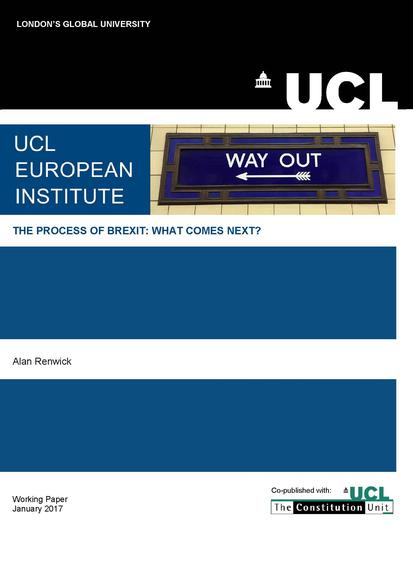 The phoney war around Brexit is almost over. For months, two immediate questions have dominated discussions: How can Article 50 be triggered? And what sort of deal will ministers seek? The Supreme Court’s ruling on 24 January answered the first question. We know much more now about the second through Theresa May’s Lancaster House speech and last Thursday’s white paper. The Article 50 bill is being debate in parliament. By the end of March – if the government gets its way – we will be entering a new phase in the process.

The question is: What comes next? Can the government deliver on its wish list? Can parliament provide effective scrutiny?  Will the courts intervene again? How is Brexit likely to play in the devolved nations? Is a second referendum at all likely?

In a new report, I offer answers to these and related questions. Here I summarise five key points.

1/ The UK government is very unlikely to get what it says it wants.

The government has set out highly ambitious goals. It wants not just a divorce agreement, but also a complex, deep, and bespoke deal on the UK’s future relationship with the European Union, encompassing a comprehensive free trade agreement, a novel form of customs association, and ongoing cooperation in areas including policing, security, and research. Furthermore, it wants all of this to be both negotiated and ratified within two years.

Whether such a deal will emerge is impossible to say; but achieving it within two years certainly looks very unlikely. First, EU leaders (so far at least) have said they will not negotiate on these terms. Rather, they initially want a divorce deal only; once that has been negotiated, they propose a transitional period that preserves many features of EU membership while detailed negotiations on future relations are conducted. Thus, the first round of the negotiations will be a discussion of what the negotiations are actually about.

Second, even if the UK government gets its way in this opening round, the negotiations thereafter will be immensely complex and difficult. They will range across most policy areas. Not only will the UK be negotiating with the EU: in addition, there will be intense negotiations among the twenty-seven remaining member states and between the European Council, European Commission, and European Parliament. Whitehall’s resources for all of this are very tight, and experienced negotiators with relevant expertise are thin on the ground.

Third, a deal such as the Prime Minister proposes will have to be agreed by the European Parliament and ratified by every member state. As the troubles faced in the Walloon parliament by the Canadian free trade agreement show, there is no guarantee that ratification will be smooth. Indeed, in some countries ratification could be subject to a citizen-initiated referendum, as occurred in the Netherlands last April for the EU–Ukraine Association Agreement.

If no deal has been done and ratified within two years, the UK government will have three main options: press for an extension to the negotiation window (which would require unanimous agreement of the member states); accept the EU’s proposed transition phase; or decide that the UK is leaving without any deal. Ardent Brexiteers dislike the first two options. But most observers think the hard and disorderly Brexit implied by the third entirely unpalatable. A government that pursued it could well be forced from office, triggering deep political turmoil.