It has long been said that women in politics act as role models and influencers for the women that come after them. But what is less clear is whether or not there is a causal effect on the impact of female MPs as a result of having female ministers in charge of government departments. Jack Blumenau has analysed two decades of parliamentary data and argues that women don’t just inspire other women, they amplify their voices and increase their impact on parliamentary debates and outcomes.

In an interview in 2013, Betty Boothroyd – the first female Speaker of the House of Commons – paid tribute to her political mentor, Barbara Castle. Castle holds an important position in the history of British political feminism not only because of her promotion of seminal legislation such as the Sex Discrimination and Equal Pay Acts, but also because she was the first woman to lead a series of important government departments, including Overseas Aid, Transport, and Employment. In her interview, Boothroyd pointed to the important effect that Castle’s leadership had on her own career: ‘She was my role model because I felt, well, if Barbara can do it then I can do it.’

As key figures in the legislative process, female cabinet ministers seem natural candidates to be “role models” to other women in UK politics. Historically, women have been under-represented in cabinet positions and so the appointment of a female cabinet minister might help to break down gendered sterotypes about the policy areas to which women are entitled to contribute. Similarly, there is also evidence from previous research that female politicians employ a distinct political style which is more cooperative and encouraging than that of their male colleagues. If these behavioural differences persist amongst leadership figures, the appointment of a female cabinet minister may promote a culture that is more conducive to, and encouraging of, the participation and influence of other female MPs.

In a recently published article, I investigate whether there is systematic evidence for the type of female leadership effects described by Boothroyd. In particular, I focus on the relationship between female cabinet ministers and other female MPs in UK politics, and look for evidence of these effects by examining parterns of participation in nearly 15,000 parliamentary debates between 1997 and 2017.

Parliamentary debates matter because they represent the main opportunity for MPs to express their positions on different policy options. If some types of MP routinely speak at greater length than others in debate, or are systematically more influential in their spoken contributions, then this could have important consequences for the representational function of our parliamentary system.

From the data I studied, there is some cause for concern, as women utter only about half the number of words that we would expect if speaking time were allocated proportionally. That is, although women occupied approximately 20% of the seats in the House of Commons during the study period, in the typical debate they contributed only 10% of the words spoken by backbenchers. Although there has been some narrowing of this participation gap in recent years, this general pattern persists throughout the period between the 1997 general election and the present day. As a consequence, if female leadership effects exist, they may play an important role in reducing the size of this gendered representational deficit.

Does the appointment of a female cabinet minister affect the size of the gender participation gap? One approach to answering this question would be to simply compare the rate of female participation in debates that correspond to different government departments. If female leadership is important, one might expect that women will speak more in debates pertaining to those departments that are led by female cabinet ministers. However, simply looking at differences across departments will not result in estimates of the causal effect of female leadership. This is because there are other important differences between departments that also affect the rate at which women participate in debate.

For example, women on average tend to speak more in debates related to the Department for Education than they do in debates related to the Ministry of Defence. If the Department for Education is led by a female minister and the Ministry of Defence by a male minister, we might conclude that female leadership drives higher engagement by female MPs. However, this ignores the fact that Department for Education mostly deals with policy areas that tend to be of greater interest to women than the policy areas of the MoD. In other words, the effects of female leadership are confounded by the differences in policy content of the two departments. We therefore cannot clearly distinguish between leadership and policy effects by using simple comparisons across departments.

In order to overcome this problem, I make use of a helpful feature of parliamentary debate data: we have information from many debates over a very long period of time. Rather than making comparisons across different government departments, I compare the participation of female MPs in debates related to the same department before and after the appointment of a female cabinet minister. This approach means that general policy differences between departments will no longer be able to confound the key comparison of interest.

For interested readers, the key statistical details of this research design can be found in the article, but the main message is clear just from plotting the raw data, as I do here in the figure below. The figure shows the proportion of words spoken by female MPs in each debate relating to each government department between 1997 and 2017 (words spoken by cabinet ministers are excluded). Grey lines correspond to periods where there is a male minister, and black lines to periods where the cabinet minister responsible for debate is a woman. 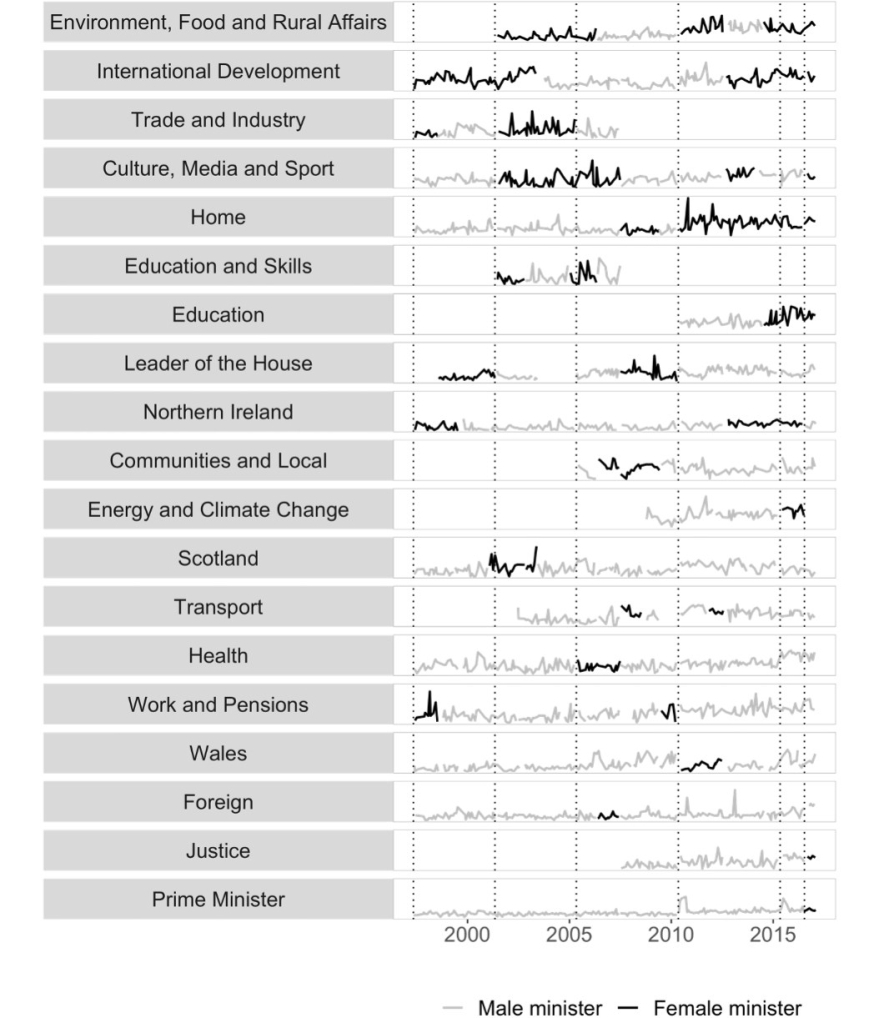 Figure 1: Proportion of words spoken by female MPs, by department

The figure provides relatively clear evidence of a female leadership effect. In many cases, the appointment of a female minister is accompanied by an increase in the proportion of words spoken by other female MPs. The effect appears to be particularly pronounced in the Trade and Industry, Home, International Development, and Culture, Media and Sport departments. By contrast, there is less evidence of an effect in some other departments, though in no cases does the appointment of a female minister appear to decrease the participation of other female MPs.

Does participation really matter? Not if the contributions those women make are not heard by other MPs. If women speak at an increasing rate, but the issues and concerns that they raise are ignored by other parliamentarians, then the importance of these effects above may be limited. However, I also show that female MPs become more influential in political debate after the appointment of a female cabinet minister.

To determine which speakers are influential, I investigate how the language used by MPs changes throughout the course of a debate. I consider an MP to be influential when the issues and concerns she raises in her speeches are adopted and discussed by other members in subsequent speeches. Having other people pick up on your framing of an issue is a way of controlling how the debate proceeds: it means other people are taking up your perspective, whether or not they agree with it. Influential MPs are therefore literally ‘shaping the debate’.

I use this approach to develop a statistical measure of debate influence (again, interested readers can see the paper), and again I find strong evidence of a positive effect of female leaders. When a female cabinet minister is appointed, other female MPs become about 20% more influential in relevant parliamentary debates compared to their influence under male ministers.

Furthermore, I also find that at least some of this increase in influence can be traced directly to the behaviour of the female ministers themselves. Female cabinet ministers appear to be disproportionately responsive to the speeches made by female MPs, giving longer and more relevant answers to female MPs’ speeches than male ministers do.

Overall, female leaders do not only lead other women to speak more, they also make sure the contributions of those women are heard by others in parliament.

These findings are consistent with a large and growing body of evidence that supports the contention that female leaders can have important motivational effects on other women. In electoral politics, for example, in countries with higher proportions of female representatives, women are more likely to discuss politics, and to participate in political activities. The election of female politicians also affects the career aspirations of adolescent girls and increases the chances that other women will stand for election. In education, assignment to same-sex teachers can significantly improve students’ educational achievements; influence course choices; and improve communication between students and teachers. Appointing women to corporate boards can also increase the number of women occupying other leadership positions within business.

There is also evidence that female leadership can have important effects on the outcomes produced by the political process, pushing policy in a direction that is more representative of women’s preferences. While it is unclear whether influence in political debate translates directly into policy influence in parliament, the findings here do suggest an additional, under-appreciated way in which female political leaders may matter for improving women’s representation: their presence amplifies the voice of other women in politics.

This post is based on Jack’s article, The Effects of Leadership on Women’s Voice in Political Debate, which appears in the British Journal of Political Science.

Jack Blumenau is a Lecturer in the Department of Political Science at University College London and a Data Science Advisor to YouGov. He tweets as @jblumenau.