On 18 September, Professor Jack Vowles from Victoria University of Wellington in New Zealand and Professor Sara Hobolt from the LSE spoke at a seminar jointly organised by The Constitution Unit and the UCL European Institute. The seminar was titled ‘The EU Referendum: Public Information and Regulation of Campaigning’. Bansri Buddhdev offers an overview of the discussion.

By the end of 2017 the UK will have voted either to remain within or to leave the European Union. Whatever the outcome, history tells us that a large slice of the electorate are likely to make up their minds only during the final weeks before polling day. The referendum campaign is therefore set to play a crucial role in shaping public opinion. On 18 September two leading authorities on referendum campaigns, Professors Jack Vowles and Sara Hobolt, came to UCL to share some lessons from overseas ahead of what will be only the UK’s third national referendum.

Jack Vowles drew out lessons from referendums in New Zealand. New Zealand is a country with a political system not too dissimilar from the UK’s, but they have greater experience of running referendums than the UK does. As well as having held government-initiated referendums similar to our own, for example on changing the electoral system, citizens can submit their own proposals for referendums. Four such referendums have gained sufficient public support to be put to a national referendum since the Citizens Initiated Referenda Act of 1993.

Jack told us that New Zealand has a strong Electoral Commission that provides a respected and objective voice in referendums. The Commission has a more active role than its counterpart in the UK. It runs information campaigns that seek to promote the deliberative aspect of referendums and to engage the public in the nuances of the debate at hand. An important part of their work is releasing press briefings with the latest factual information for journalists to use. Producing these provides journalists with an unbiased source to refer to in their work.

The Commission can also reprimand a campaign if it is spreading misinformation which, as it would be picked up by journalists, serves as a deterrent against campaigns steering too far from the truth. The Broadcasting Standards Authority and the Advertising Standards Authority can accept and consider complaints made against campaigns during an election, but they are much more hesitant to uphold complaints, which is why a reprimand by the Electoral Commission holds greater weight.

Jack then answered questions on referendums in New Zealand and discussed what lessons could be learnt ahead of the UK’s EU referendum. A member of the audience speculated on how successfully UK political parties have occupied the space of the authority source, which in New Zealand is taken up by the Electoral Commission. The panel responded that in the previous EU referendum, in 1975, the public had more trust in then political leaders such as Harold Wilson, James Callaghan and Shirley Williams than is the case today. However, it was suggested that voters do have to get their information from somewhere and so the positions taken by political parties could well still be influential this time round.

The EU referendum: Far from a done deal

Sara Hobolt’s talk focused specifically on the upcoming EU referendum. Sara argued that the political establishment should not be complacent and assume that the vote has already been won for the ‘remain’ (or pro-EU) camp. She offered three reasons for this.

Firstly, the ‘remain’ camp has a problem with mobilisation. Sara showed that although the ‘remain’ camp has a narrow lead in the polls, the ‘leave’ camp is more likely to mobilise voters to turn out to vote (see Figure 1, below). She noted that the EU referendum could follow the same pattern as the alternative vote referendum, where the ‘Yes’ camp were able to engage fellow politicos in complex arguments, but were not able to engage ordinary voters.

Figure 1: Percentage of voters that consider themselves ‘very likely’ to turn out to vote in the EU referendum (Survation, 4 September)

Secondly, there is a precedent for referendums relating to the European Union to be lost by the pro-integration campaign. Sara showed that since 2000 there have been six referendum defeats on matters of closer integration with the European Union – in Denmark, Sweden, France, and the Netherlands, and twice in Ireland. These six were unsuccessful in spite of the fact that the major political parties, the trade unions and the media were all backing the pro-integration option – a luxury that the UK’s ‘remain’ campaign is unlikely to have.

Finally, Sara presented data showing how Eurosceptic the British are in comparison to the rest of northern Europe (see Figure 2, below). Recent polls show the public is marginally positive overall about the EU (+8 in July), a figure that has been increasing since the beginning of 2015. This is potentially due to the steady contributions of politicians and business leaders pointing to the economic benefits of remaining in the EU. Hence, there is a possibility that this trend will continue into the campaign. Nonetheless, Swedish, French, Finnish, Danish and German voters all remain more positive than their British counterparts.

Figure 2: If there was a referendum on your country’s membership of the EU, how would you vote? (percentage ‘remain’ minus percentage ‘leave’) (YouGov)

Sara ended by speaking of the greater impact the campaign has during a referendum in comparison to an election. As an example, she showed that the Danish and Swedish referendums on joining the Euro each start started with the ‘Yes’ vote ahead, but ended with a ‘No’ vote (See Figure 3, below). Thus, even though ‘remain’ leads in most EU referendum polling so far, there is much to play for between now and whenever David Cameron chooses to hold the vote. 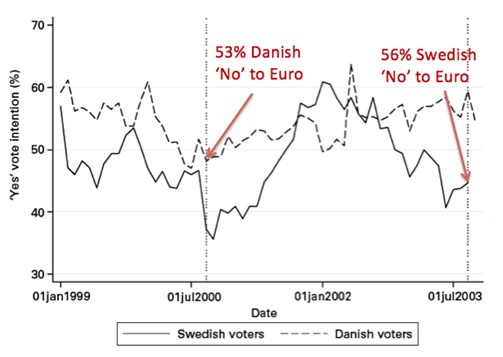 Figure 3: ‘Yes’ vote intention, Swedish and Danish referendums on membership of the Euro

Video highlights of Jack’s talk can be viewed here and Sara’s here.

Jack Vowles is a Professor in the School of History, Philosophy, Political Science & International Relations at Victoria University of Wellington. He has published widely on elections and referendums in New Zealand.

Professor Sara Hobolt is Sutherland Chair of European Institutions at the London School of Economics’ European Institute. Her publications include Europe in Question: Referendums on European Integration (Oxford University Press: 2009).

Bansri Buddhdev was a Research Volunteer at The Constitution Unit from June to September. She has now returned to the University of Leeds for the final year of her Politics and Parliamentary Studies BA, having spent the last year working in Parliament and in Congress in Washington DC.