The 2015 general election saw the election of the youngest MP since 1832. Chrysa Lamprinakou draws on Parliamentary Candidates UK data to highlight the slow but steady downward shift in the age at which MPs start their careers and the variation across parties.

In our previous blog, we discussed the new Parliament’s composition in terms of gender and race. Our analysis showed that compared to the 2010 intake, there are now 48 more women MPs and 14 more BME MPs in the newly elected House; women now constitute 29% and BME MPs 6% of the Commons. While the record number of women and BME MPs made headlines, much of post-election attention was focused on the electoral landslide of the Scottish National Party. The SNP elected 56 MPs to Westminster, 50 of whom were elected for the first time.

Among the new Scottish cohort, was 20-year old politics student Mhairi Black. The success of Ms Black, the SNP MP for Paisley and Renfrewshire South, hit the news for two reasons; first, she defeated one of Labour’s most senior figures, Douglas Alexander and second, she is now the youngest Member of Parliament since the Reform Act of 1832.

Setting aside Black’s status, the 2015 general election confirms the slow but steady downward shift in the age at which politicians start their careers in the House of Commons. Data collected since 1945 (King, 1981) clearly show that gradually over the years more and more new MPs arrive in the Commons in their 30s and early 40s. Looking at the 2015 intake, the average age is 51 years but the average age of the MPs who were elected for the first time on 8 May, is significantly lower at 44 years. Some variation exists, however, and is evident when we look at the age of MPs by party. 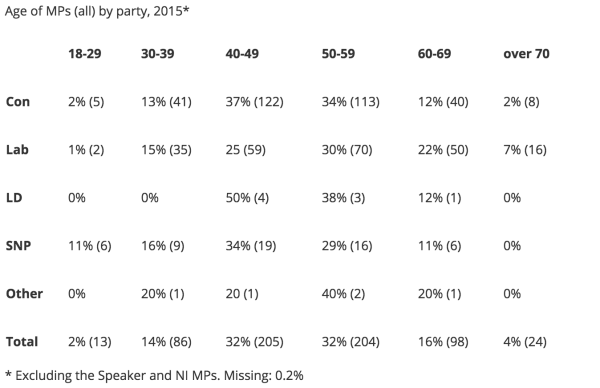 The SNP not only elected the youngest candidate but is the party with the highest number of MPs in their 20s, 11% compared to the Conservatives’ 2% and Labour’s 1%. Yet most of the SNP’s MPs, 34%, are in their 40s while no SNP MP is aged 70 or over.

In contrast, Labour party MPs are older and the party has the highest number of MPs aged over 70 (7%). It is interesting that Labour is the party with the oldest MPs as four of the party’s MPs are aged 80 or over. Sir Gerald Kaufman, aged 85, is not only the ‘Father of the House’ but also the oldest MP in the Commons. And three Labour MPs, Dennis Skinner, David Winnick and Paul Flynn, are over 80 years old. Most Labour MPs, 30% are within the 50-59 group, with 25% of MPs in their 40s and 22% in their 60s. Most Conservative MPs (37%) fall within the 40-49 age group while the combined 40-59 age group constitute 71% of all Conservative members of the House. Only, 2% of the Conservative MPs are aged over 70, with no member over 80 years old. Finally, the 40-59 age group pattern seems to apply to the Lib Dems, but due to the very low number of MPs for the party we cannot draw safe conclusions. Thus, because of party cohort differences, it makes sense to look at newcomers than the whole house.

The age group pattern by party changes slightly when we look at the 2015 newcomers. Most of Conservative new MPs (44%) are in their 40s followed by a significant 30% who start their parliamentary career in their 30s. The same applies to the Labour party with 34% and 30% respectively. We see however, that a significant number of Labour and SNP MPs entered parliament for the first time in their 60s (11% and 12%). The SNP has the highest percent of newcomers in the House, with 90% of SNP MPs elected for the first time, and one third of these are in their 40s.

Finally, these figures are in accordance with the parties’ candidate selections. The average age of the Conservative and Labour candidates is 47 and 48 years old respectively and both parties drew at least one third of their candidates from the 40-59 age group. Taking a brief look back we see that these figures are consistent with the general trend that has been documented in the literature; we see that in parliaments where the turnover is high, the age of newly elected MPs is decreasing. We should note that since the 1970s the number of MPs who start their parliamentary career in their 30s has increased and is another characteristic of what King (1981) describes as the rise of the ‘career’ politician. The 2015 Parliament is younger and more diverse and most importantly, consistent with the hypothesis of the changing political class in the UK.

Chrysa Lamprinakou is a Research Associate (part-time) at the Constitution Unit, University College London and a Post-Doctoral Researcher at the Department of Politics, Birkbeck University, London.