Chrysa Lamprinakou looks at the the occupational background and pre-parliamentary political experience of 2015 candidates and indicates the cohort so far reaffirms the increasing level of professionalisation of the political class.

The argument that Parliament is more and more unrepresentative of society has been primarily linked to the socio-economic and educational background of MPs. Tim Wigmore at New Statesman Politics Blog, Paul Cairney and Joni Lovenduski have repeatedly focused on the dominance of white, male and privately educated politicians who comprise an elitist and often out-of-touch political class. In an increasingly professionalised political environment, however, the occupational background and pre-parliamentary political experience of candidates is of vital importance.

King’s (1981) seminal work on the rise of the career politician noted the increase in the number of MPs who had chosen ‘politics-facilitating’ occupations such as barristers, journalists, teachers and academics. From 1945 – 1979, on average more than one third of Conservative and Labour parliamentarians (35.2%) had chosen professions conducive to following a parliamentary/political career. It is worth noting though that only 8% of parliamentarians over that period came from a profession with direct links to politics and parliament, such as journalism or public relations.

Recent years have seen an even more abrupt change in the professional background of parliamentary candidates with the emergence of those who are characterised as ‘political insiders’. Today, a significant numbchrysa_lamprinakou Chryer of candidates have chosen occupations with a direct link to politics such as full-time elected officials, party officials, political researchers and special advisers. Notably in the 2010 general election 30% of all candidates had pre-parliamentary political experience. Most of them (16%) were working within (political researchers/special advisers) or around the Westminster village (lobbyists, journalists, trade union officials) while 13% had been previously elected in local councils, regional assemblies or the EP.

Pre-parliamentary political experience was common among the 2010 cohort of MPs, with 39% having direct links to politics. In fact, 13% of current MPs were previously elected at local or regional offices and 26% had worked primarily in politics (e.g. political researchers, party officials, lobbyists). The candidates (including incumbents) with previous professional experience in the traditional ‘politics-facilitating’ occupations such as lawyers and academics constituted 20% of the 2010 selections and 18% of MPs. Contrariwise, only 1% of the MPs were manual workers, drawn from 2% of the 2010 candidate cohort.

Looking forward to the 2015 general election, we can provide an early account of the type of pre-parliamentary experience of the candidates selected thus far (excluding incumbents). Of the 712 candidates who have been selected to run in 2015 (As of 14 November 2014 and for whom data is available), 30% (211) are already involved in politics in one form or another. Of these ‘political insiders’ 11% are elected officials, 7% political and/or parliamentary researchers, 5% work in lobbying, 4% are party officials and 3% are Trade Union officials. 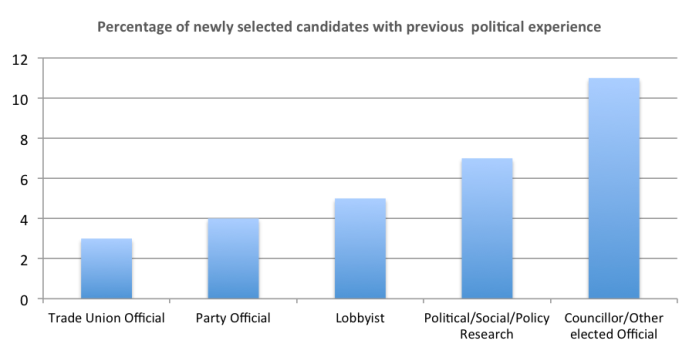 In terms of party differences, we identified that more than one third of Labour candidates (38%) have previous political experience compared to 22% of the Liberal Democrat and 20% of Conservative candidates. In addition, 50% of the Labour party candidates with previous political experience are women in contrast to 29% for the Conservatives and 34% for the Liberal Democrats.

In retirement seats, once again more than half of the Labour party selected candidates (56%) are ‘political insiders’. The equivalent percentage for the Conservatives is 17% and the Liberal Democrats is 26%. The same pattern appears when we analyse the parties’ target seats with the Labour and Liberal Democrat parties selecting more than half (57% and 55% respectively) of their candidates with previous political experience contrary to 21% of Conservative selections. Overall, it seems that political experience is a very important factor for the Labour and the Liberal Democrats when they select candidates to replace their party’s incumbents and to fight target seats.

Based on the data we have collected thus far for the 2015 general election cohort, there are two things to note. First, the 2015 data seem to confirm the previously recorded pattern of an increasing number of candidates with previous political experience. Second, in terms of party diversity the selection patterns that we have monitored thus far confirm that the Labour party has selected the highest percent of political experienced as well as younger candidates compared to the Conservatives and the Liberal Democrats. This preliminary look at the professional background and political experience of candidates reaffirms the increasing level of professionalisation of the political class.

5 thoughts on ““The Profession I chose was Politics”: The New Generation of ‘Political Insiders’”