Individual electoral registration (IER) has been a huge project, requiring co-ordination between the Cabinet Office, Government Digital Service, Electoral Commission and electoral registration officers in local authorities. On January 25 representatives from these four bodies discussed the challenges they faced and how the project is being brought to a successful conclusion at a Constitution Unit seminar. Roberta Damiani and Laëtitia Nakache offer an overview.

Individual electoral registration (IER) has brought about a significant change in how British electors register to vote. The emphasis is on the term ‘individual’. Previously, one person in every household was responsible for registering everyone who lived at that address; now, with IER, each person is required to register individually. Designing and implementing such a system was a challenge, not only from a human point of view but also from a technological one, as it required a huge amount of data to be digitised and processed. But it also offers exciting opportunities to make citizens more engaged in the democratic process. This blog highlights the key issues debated at an event about IER hosted by The Constitution Unit on 25 January and chaired by Dr Alan Renwick.

The first speaker, Gareth Baynham-Hughes from the Cabinet Office, explained that IER was conceived with four main objectives:

– To ensure a complete register

– To reduce the risk of fraud

– To boost registration among under-represented groups

– To increase citizens’ choice in registering to vote

To advance these objectives, IER has been combined with the development of a new online registration process. Baynham-Hughes mentioned that 75 per cent of those who have registered through IER so far have done so by using the website, and that user satisfaction with the website is above 90 per cent. Another novelty is that, while under the old system no form of ID was required except a signature, now each individual voter has to supply details such as their date of birth and national insurance number, which are verified before somebody is added to the register.

Mr Baynham-Hughes emphasised that the project has so far been largely successful, primarily because IER has been set up effectively and because of the major investments that were undertaken to support it. He also pointed out some further desirable improvements: in particular, some complexities should be removed to simplify how citizens use the system. The main objective of the Cabinet Office is to set up a registration system which is ‘quicker, cheaper, accessible and digital’ by 2020.

The second speaker was Mark O’Neill from the Government Digital Service (GDS) who, in his own words, was there to ‘talk geek’ about the technological difficulties faced in implementing IER. He explained that the challenge lay primarily in being able to sustain a huge number of users accessing the website, not only from the UK but also British nationals trying to register from overseas. For instance, before the 2015 general election about one million users tried to register in the week before the deadline (see Figure 1, below). Being able to handle such a vast online traffic requires a sophisticated software system. 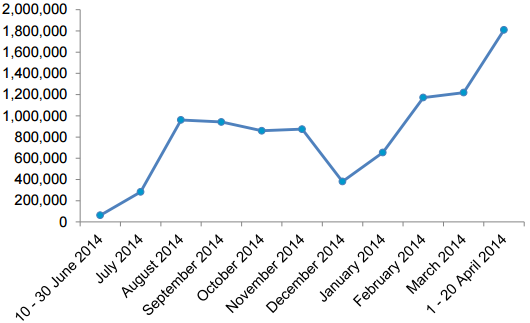 Figure 1: applications to register to vote between the introduction of IER and the registration deadline for the 2015 general election (Source: Electoral Commission)

To ensure that users could navigate the system GDS conducted several ‘gorilla testing’ experiments, setting up labs (for instance, outside libraries) where randomly selected people could try out the programme. He said that the results were overall very positive.

He also mentioned that the website allows new users to be broken down by age, which facilitates targeting of underrepresented groups, such as young people. He concluded his talk by underlining that today there is a massive opportunity to help people connect with democracy through online mechanisms. IER is one of the first examples of this, and a very good one.

The third speaker was Frances Biggs, Head of Electoral Registration in the London Borough of Southwark. She talked about the duty of electoral registration officers to ensure that the register in their area is ‘complete’ and ‘accurate’, where ‘completeness’ means that all of those entitled to be on the register actually are on it, and ‘accuracy’ means that there are no false entries. She argued that, despite having nothing against the programme itself, from her point of view IER is still a work-in-progress: there is still work to be done to make the process as streamlined as possible and to ensure that registers are as ‘complete and accurate’ as they can be. Sometimes people do not reply to requests to register, no matter how many times local authorities try to get in touch with them. But for her the challenge of getting new residents to register is the main issue that remains to be tackled, especially in boroughs such as hers with a high turnover rate and where sometimes it can be very difficult to know who lives at a certain address. 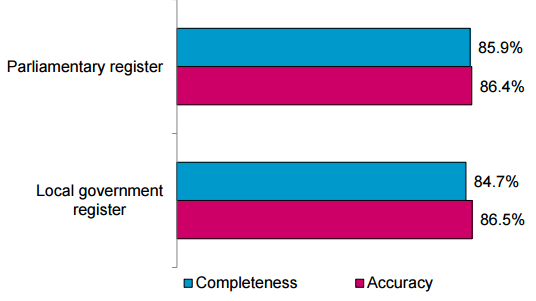 The fourth speaker was Andrew Scallan from the Electoral Commission (who wanted to underline how, despite its name, the Electoral Commission is not actually in control of everything which involves elections). He talked broadly about the changes introduced with IER, which was initially proposed by the Labour government before 2010 and then included in the Coalition Agreement. The requirement of a signature, which was needed to register under the old system, has been dropped and hence the whole procedure can be completed online. Andrew told us that the new focus on individuals rather than ‘heads of household’ has proved a challenge for the electoral registration officers, who now have to chase up individuals who do not register and who may often be difficult to access. Students, who are able to register both at their family address and at their term-time address, remain a special case. He also mentioned that one of the main goals is attracting young voters, who remain the least likely to register. 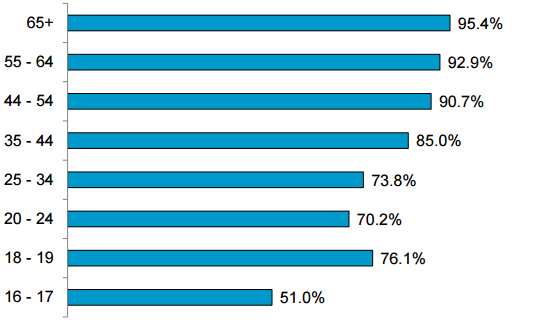 Individual electoral registration is a very good example of the opportunities offered by the internet to engage citizens in the political process, and hence to create a healthier democracy. Getting people interested in politics by exploiting new technologies is a topic which has been attracting increasing scholarly attention in recent years. IER is off to a very promising start to work in that direction. There are widespread concerns about IER, as many fear that it will disfranchise large numbers of people rather than attracting them. Nevertheless, all of the speakers agreed that, while there remains room to hone the system further, those concerns have been greatly exaggerated and that the results so far have been very encouraging.

Mark O’Neill was Head of Innovation and Delivery at the Government Digital Service from May 2011 to November 2015.

Frances Biggs is Head of Elections and Registration Services at the London Borough of Southwark.

Andrew Scallan is Director of Electoral Administration at the Electoral Commission.

Roberta Damiani and Laëtitia Nakache are Research Volunteers at The Constitution Unit.

3 thoughts on “Individual electoral registration: the inside track”