Prime ministers are prominent political actors in parliamentary democracies, yet there is little understanding of how they are held accountable by parliaments. What are the mechanisms through which parliamentarians may question them and how do such mechanisms vary procedurally? The UK House of Commons famously provides a high-profile weekly session for questioning the head of government at Prime Minister’s Questions. How does PMQs compare with questioning mechanisms in other parliaments?

Drawing on my PhD research, this blog presents preliminary findings from a survey of procedural rules regarding such mechanisms in 32 parliamentary democracies, and illustrates the variety of procedures available in different countries.

How does questioning take place?

Whether prime ministers are questioned individually or together with other ministers is likely to be important in determining how they interact with parliamentarians. The nature of government in parliamentary democracies is collective. Prime ministers lead the government and are collectively responsible together with their cabinets; but in most countries they are not responsible for specific ministerial portfolios. Prime ministers are expected to account for their own actions and also to speak for the government. Consequently, whether or not they are questioned individually or together with ministers is likely to have an important effect on the types of questions they are asked.

An additional dimension concerns the distinction between plenary and committee mechanisms. The setting of the procedure creates different types of questioning environments. For example, the Liaison Committee in the UK House of Commons was introduced to complement the main plenary mechanism (PMQs), specifically in order to configure a more focused forum of scrutiny.

The first step in exploring these dimensions was to chart all the oral questioning mechanisms available in the lower chamber in every country in the sample, and to investigate whether they are set in the plenary or in committee, and whether questioning is collective or individual (Chart 1). This included individualised mechanisms that explicitly include prime ministers, and mechanisms that could potentially be used to question prime ministers.  Secondly, I identified the procedures that are certain to include prime ministers, based on the rules of procedure or on evidence of their attendance during questioning (Chart 2).

Among these countries there is a clear preference for questioning prime ministers in the plenary: 33 out of 34 mechanisms. The UK and Ireland display an exceptional variety of plenary mechanisms. Leaders’ Questions in the Irish Dáil only allows interventions from party leaders, and Business Questions to the Taoiseach restricts the topic of questioning to parliamentary business. Aside from the weekly PMQs, the UK Prime Minister may also be questioned after giving statements in the Commons, and may be addressed urgent questions. Similarly to the UK, New Zealand and Italy also allow urgent questions, but otherwise display a practice of questioning prime ministers alongside other ministers which is similar to equivalent mechanisms in a diverse range of countries that includes Canada and Australia, but also Greece, Macedonia, Slovenia, Slovakia and the Netherlands. The UK includes the only committee in the sample that holds regular hearings with prime ministers (the sample does not include sub-national legislatures).

An important variable for understanding how questioning is configured is the frequency with which each mechanism is used.

Individualised questioning mechanisms, which require the presence of the prime minister by default, are convened at least once every sitting week in Ireland, the UK, the Czech Republic, and Denmark, once a month in Romania, and once a year in Israel.

Who gets to ask questions?

In investigating how questioning mechanisms structure the interaction between parliamentarians and prime ministers, another relevant aspect is who gets to ask questions. Two important variables in this respect are the method and the criteria for allocating questions. 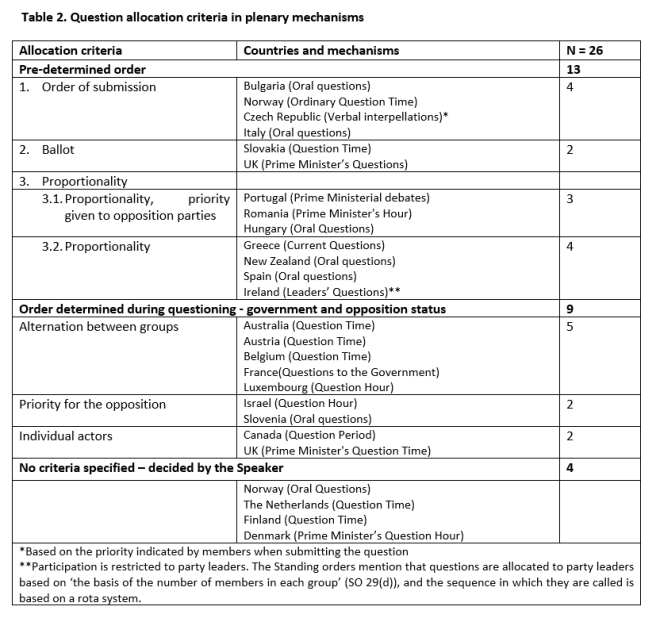 Another relevant variable concerns the ways in which parliamentarians may intervene to ask questions. Whether questions may be asked without notice and whether follow-up questions are allowed, and from whom, has an impact on participation.

Some mechanisms do not allow follow-up questions, restricting the dialogue to single exchanges between the prime minister and parliamentarians, either on a question submitted in advance, as in Bulgaria, Greece and Portugal, or on a question asked spontaneously, as in France, Israel and Finland. This type of mechanism may allow more questions during a single session, but restricts participation on each particular topic to an exchange between the prime minister and the initial questioner.

Permitting follow-up questions potentially allows more time for engagement with a particular issue. The dialogue is still restricted to an exchange between the prime minister and the initial questioner for countries in the second column. By allowing other members to intervene after the initial follow up, mechanisms in columns three and four extend participation, consequently facilitating a more open engagement with each topic.

Procedural variation suggests that there may be different ways to configure the relationship between the prime minister and parliament through questioning mechanisms. Among the countries in the sample, prime ministers are mainly questioned together with ministers:  18 countries use collective plenary mechanisms, whilst only nine use individualised plenary mechanisms. Within collective mechanisms there may be additional degrees of individualisation – prime ministers may be questioned at the beginning of the procedure, as is the case in Canada, or may be addressed questions throughout, as in Australia.

Whilst most countries use a single mechanism to question prime ministers, the UK and Ireland operate on a similar principle of using multiple mechanisms, each associated with a different purpose. In the UK, the prime minister is questioned weekly at PMQs, but may also be addressed urgent questions, makes statements in the House of Commons and answers questions subsequently, and is questioned by the Liaison Committee two or three times each year. In Ireland there is a routine, twice-weekly questioning mechanism based on questions submitted in advance; a mechanism based on spontaneous questions restricted to party leaders; and a spontaneous mechanism that follows the Taoiseach’s weekly Business statement.

This post was originally published on the PSA Parliaments specialist group blog and is reposted with permission.

Ruxandra Serban is a PhD candidate at UCL, where her research investigates the relationship between prime ministers and legislatures in parliamentary democracies.

3 thoughts on “Questioning Prime Ministers: a survey of procedures in 32 parliamentary democracies”