For the past decade House of Commons select committees have held pre-appointment scrutiny hearings with preferred candidates for some of the most senior public appointments. Many select committee chairs and members consider these to be a waste of time because there is no power of veto. However, research published in a new Constitution Unit report suggests that they have much more influence than committees realise. Robert Hazell outlines these findings. 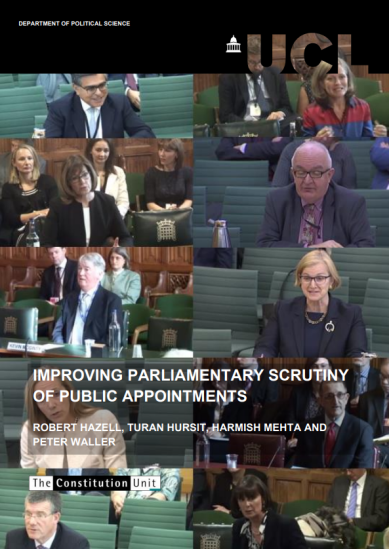 Although little remarked upon at the time, one of Gordon Brown’s more significant constitutional reforms was the introduction of pre-appointment scrutiny hearings. Following his 2007 White Paper The Governance of Britain, the government agreed that candidates for 50 of the most senior public appointments would be scrutinised by the relevant select committee before the government confirmed their appointment. Some select committee chairs and members consider such hearings a waste of time, because they have no power of veto; but Constitution Unit research has shown that they have more influence than select committees realise.

In the last ten years select committees have conducted just over 90 pre-appointment hearings (for a full list see here). The Constitution Unit has conducted two evaluations of their effectiveness: first in 2009, studying the first 20 hearings; and second in 2016-17, when we looked at the next 71. We found three cases where the candidate withdrew following a critical hearing; and two instances where statements or disclosures at a hearing subsequently triggered a resignation. So pre-appointment scrutiny undoubtedly has an impact, even though committees have no formal power of veto: they are an important check on the integrity and effectiveness of senior public appointments, and a curb against ministers abusing their powers of patronage. And their effectiveness cannot be measured solely by the number of negative reports – the select committee hearings also help to deter ministers from putting forward candidates who would not survive this additional public scrutiny.

The puzzle remains that select committee chairs do not recognise how much influence they wield. There are two reasons for this. First, the baleful example of Washington: when pre-appointment scrutiny was introduced, many MPs anticipated that the hearings would be like confirmation hearings in the US Senate, which does have a power of veto. Second, although pre-appointment scrutiny does provide an important check, it is rare for an individual committee or chair to have experience of thwarting an appointment: there have only been five such cases in the last ten years. So for most committees, most of the time, pre-appointment scrutiny can feel like a bit of a chore.

But it is now more important than ever, because of the relaxation of the rules following the 2016 review of public appointments conducted by Sir Gerry Grimstone. The new rules enable ministers to make more appointments on political grounds, and without the previous rigorous requirements for open and fair competition directly regulated by the Commissioner for Public Appointments. It does not follow that ministers will abuse the new rules, and so far Theresa May has shown less inclination to make patronage appointments than David Cameron. But the temptation is always there: select committees will need to keep a close eye on all public appointments in their area, and be ready to hold inquiries whenever the new Commissioner (Peter Riddell) raises concerns.

In our new report on pre-appointment scrutiny, published today, we recommend that select committees adopt a bolder, but more selective approach. They need not limit their scrutiny to the top 50 appointments on the list agreed with the Cabinet Office. That leads to needless scrutiny of some appointments in the top 50, while others might be of greater concern. If the Commissioner sounds the alarm, committees should respond by summoning the minister or Permanent Secretary to explain why they have bent the rules. This may happen with one of the top 50 appointments, or one falling outside. But even where the Commissioner is not concerned, it is for the committees to decide which appointments merit scrutiny.

This would give committees greater control over their workloads, and make pre-appointment scrutiny seem less of a chore. But as well as being more selective, committees need to be more systematic. At the start of a parliament, or at the start of each session, each committee should discuss its scrutiny role in relation to public appointments, how much time it wants to devote to it, which posts are of particular interest, and how much it is willing to delegate to the chair and the clerk. Committees need not be prisoners of the Cabinet Office list: Liaison Committee guidelines recognise that committees may go wider, but they rarely do so.

One committee has already adopted this bolder approach. The Treasury Committee has led the way, routinely scrutinising several public appointments in addition to those on the Cabinet Office list: they include the Governor of the Bank of England, the Deputy Governors, members of the Monetary Policy Committee, and the chair of the Financial Conduct Authority. The Treasury Committee has also been more systematic in administering a rigorous questionnaire to all candidates, to check on their suitability for the appointment. This saves time at the oral hearing, and enables the committee to focus on the main points of interest. It also flushes out matters of concern: in the committee’s hearing with Charlotte Hogg, newly appointed Deputy Governor of the Bank of England, it emerged that she had not declared a potential conflict of interest, which led the Bank to initiate disciplinary proceedings, and to Hogg’s subsequent resignation.

This shows how much select committees can achieve through sheer dogged persistence. The Treasury Committee has never received any encouragement from successive Chancellors for its keen interest in public appointments. But for 20 years it has persevered, and improved its procedures, in particular through pioneering the use of questionnaires. It has also extended the range of appointments being scrutinised. Its experience shows that parliament has all the powers that it needs for pre-appointment scrutiny. Select committees need not feel constrained by the Cabinet Office guidance or the top 50 list: they need simply to be a bit bolder in setting their own agenda for scrutinising public appointments, rather than having it set for them.

Our new report, Improving Parliamentary Scrutiny of Public Appointments, can be accessed at this link.