Annabelle Huet reports on Joe Twyman’s lecture on Europe, the European Elections and the Rise of UKIP at the Constitution Unit

751 members of the European Parliament will be elected from 28 countries between 22nd and 25th May 2014. On May 22nd Britain will vote for 73 members in total – the third highest proportion of members after Germany and France. Yet most voters are only vaguely aware of the consequences of their choice on European affairs. People and political analysts alike seem more interested in discussing the rise of UKIP, the UK’s foremost anti-establishment and Eurosceptic party, than the future of EU policy.

At the latest UCL Constitution Unit Seminar Joe Twyman, a founding director of YouGov, presented statistics that show that there is indeed a reason for this interest. This time, “the rise of UKIP” is much more striking than what has been observed during previous elections. Why? Because UKIP has gained a 10% overall rise in the polls and is currently predicted to surpass even the Conservatives next Thursday. Less than two weeks before the vote, YouGov’s polls show an estimated 31% of the electorate are intending to vote for UKIP. This would translate to 30 UKIP seats in the European Parliament, more than twice as many as they currently have. Statistics from previous cycles show a return to low levels of support for UKIP shortly after European elections took place, but this time Twyman predicts support for UKIP could well remain high until next year’s general election. 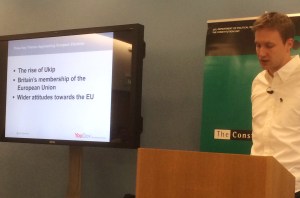 However, Twyman suggests that this 10% rise in support for UKIP does not correlate with a rise in people’s concerns about Europe. Voters are not just concerned about Europe but about a whole host of other issues. YouGov’s recent polls have shown that Europe does not even feature in the top 5 most important issues facing the country as far as respondents are concerned. Unsurprisingly the economy and immigration are high on the list of priorities whereas Europe only comes 6th.

According to Twyman, the rise in UKIP support can be attributed to what he terms the three Ds: Dissatisfaction, Distrust, Disapproval. UKIP supporters and supporters overall are more sceptical, not just about Europe, but seemingly about any topic at all. An astonishing 95% of UKIP supporters do not trust the country’s leading politicians compared to 72% of British adults in general. 82% of them believe Britain is a worse place to grow up in than it was thirty or forty years ago (compared to 55% of GB adults in general). YouGov even asked about attitudes to the MMR vaccine in a bid to highlight how generally more suspicious UKIP supporters are than other voters. Compared to 0% among supporters of the three big parties, 13% of UKIP supporters believe the MMR vaccine to be not only unsafe but actually dangerous. Arguably, the ‘3 Ds’ trend is noticeable across Europe as sceptic parties increasingly come close to 30% of voting intentions in countries such as France, the Netherlands or Austria.

Having said that, Twyman emphasised that UKIP remain a party of staunch Eurosceptics, citing polls that show an overwhelming 96% of supporters would vote to leave the European Union in an In/Out referendum. 58% of British adults support a referendum on Britain’s relationship with the EU but it appears that apart from the “fruit cakes, loonies and closet racists” (David Cameron, 2006) of Britain, a large proportion of respondents would prefer to renegotiate Britain’s place in the Union rather than leave altogether (42% compared to 24%). Twyman argued that this wider dissatisfaction with the current European relationship reflects the fact that the EU is failing to provide an attractive narrative that would encourage public support for the European project.

If the polls are to be believed UKIP and other Eurosceptic parties will be the clear winners of the upcoming European elections, reflecting the EU’s failure to engage with the British and European public. In addition, if Twyman is to be believed, public support for UKIP may not dwindle as it has in the wake of European elections in the past. UKIP is moving away from being a simple Eurosceptic party to being a party for all kinds of sceptics. It is part and parcel of the political landscape, making anti-establishment the new establishment. For the mainstream parties, crafting a narrative powerful enough to entice voters back to the main parties before next year’s general election could therefore prove tougher than expected.

One thought on “What can we learn from the party of “fruitcakes, loonies and closet racists”?”